Well we have been busy here in the big city for about a week now.  Today we are heading to Montevideo via the boat – leaving our car here in the garage.  For the past week we have been pretty busy doing lots of things and being city dwellers.  First off I got a bit of the tourista bug so was down for a day, it’s took a shot at Hayden as well so he was also down for a day – but we are back to normal now… Overall we have been cooking at our house since it has a BBQ (Parilla) up stairs on the roof area.  Given that we have been eating out for the past month or so it has been nice to cook and eat our own meals.   Ok, back to your normally scheduled “things we did”…

Polo Day:  We had a great time doing Polo Day here.  They come and pick you up and drive out of the city for about an hour – then you get a class on polo, lunch and finally you get to ride and play a match.  Overall everyone had a great time – my horse would not run/gallop/trot or move any faster than a walk – and I tried everything less using a whip which I did’t have.  Oh well… polo is actually very hard, but very civilized.  What you don’t know is that it’s a team of 4 vs 4 and then they have “periods” of play.  This could be 6 or 7 minutes.  Each period the rider gets a new horse… So 4 players x 5 periods = 20 horses at a minimum for field a team… Crazy.

These were the pro’s playing polo before we did 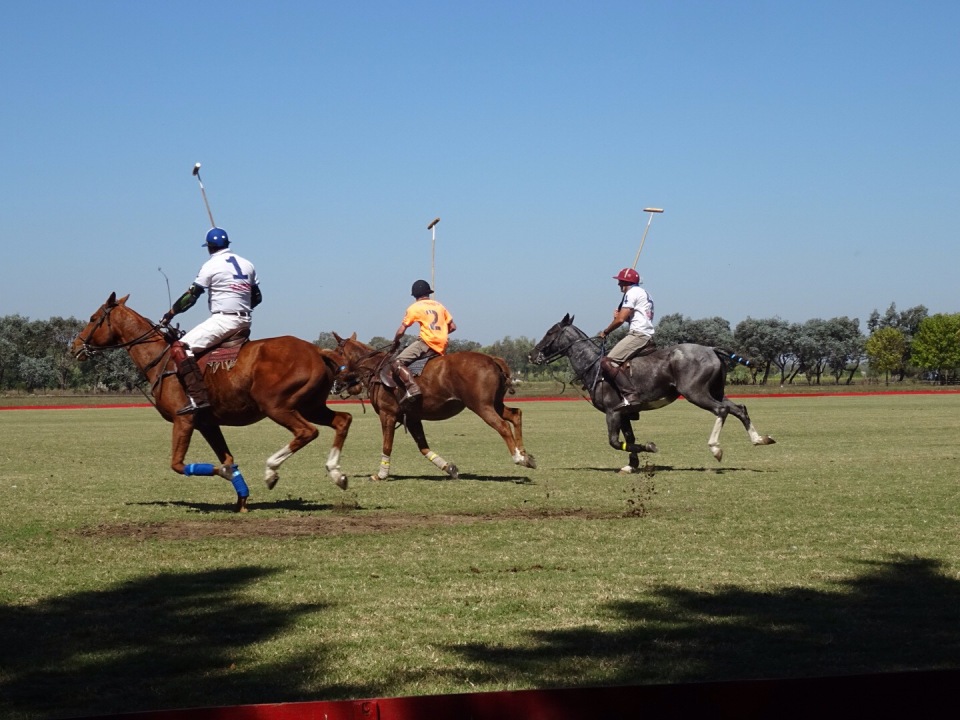 Walking Tour:  we did a great walking tour of the city – actually two different tours.  The boys got to learn a lot about history, including seeing Eva Perone’s burial place and learning her story.  ONe thing about Argentine’s is that they still have some pretty deep feelings about the Falkland Islands and we’ve seen a lot of tribute and focus on reclaiming their lands.  China recently was here and did a deal with Argentinia, part of the deal was that China recognized these islands as being Argentine, and Argentina recognized Taiwan as being part of China… oh well you get the point.

Eva Perone’s final resting spot. Read about her journey – her body moved around for many years after her death, and finally came back here in the 70’s.

Soccer Game:  we got hooked up with a guide who took us to a local soccer match on Sunday (easter) – we will always remember this one.  50,000 fans packed into the stadium, singing, standing and chanting the entire time.  There’s no pause for announcers, tv breaks, etc… which is very cool.  We all bought shirts of the River Plate team – so now we have official futbol jerseys.  I took a bunch of video, but can’t get it off my camera without a PC, so it will have to wait until I get back to the states.  Dumb Sony.

Uh, how many people are going to this futbol game? We had 4 checkpoints – this game no opposing team fans were allowed in – reason – after last years game people died… 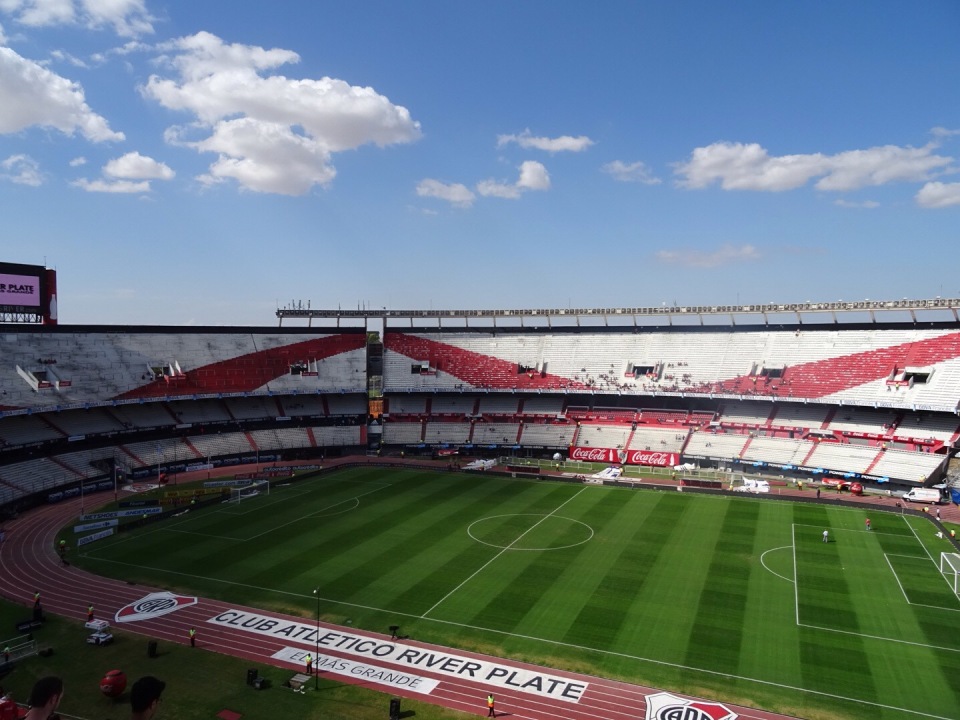 Celebration of Falkland Islands Conflict before the game…. uh you lost? You’d never know from here.

Churches & Pope Hair Cut:  We’ve been in a couple of great churches here – they are amazing.  On our walking tour we went by a place which is where the current pope used to get his hair cut.  We decided the next day that it would be appropriate to have the boys get their hair cut at the same spot.  So we went and got the “pope”.  It’s a razor cut – with a hand razor – I think Hayden’s was dull because he was wincing the whole time.  But in the end the boys got trimmed up and we are set for another month. 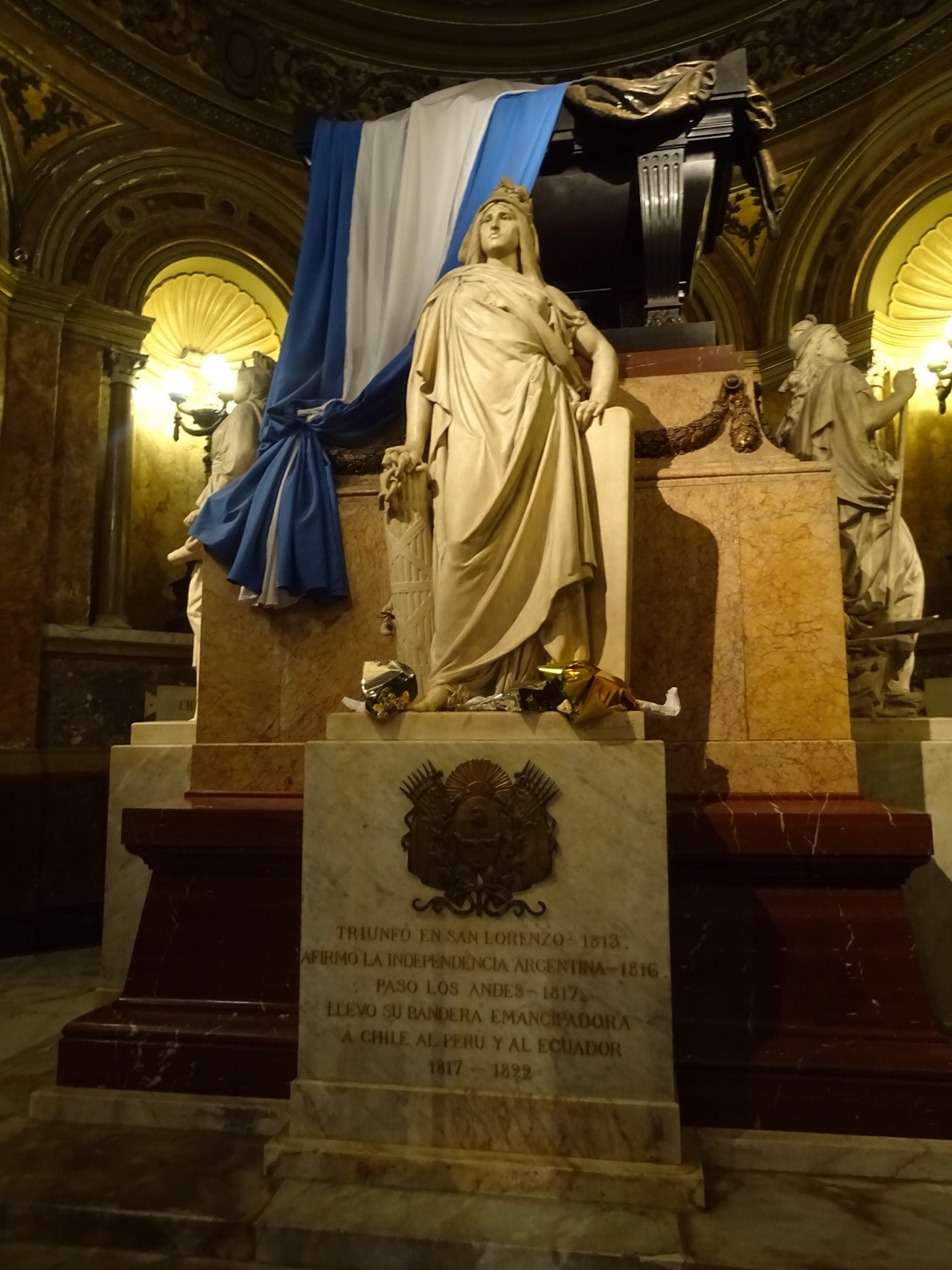 Tomb of San Martin – the saviour of Argentina – leader of military battles – body is guarded 24 hours a day. 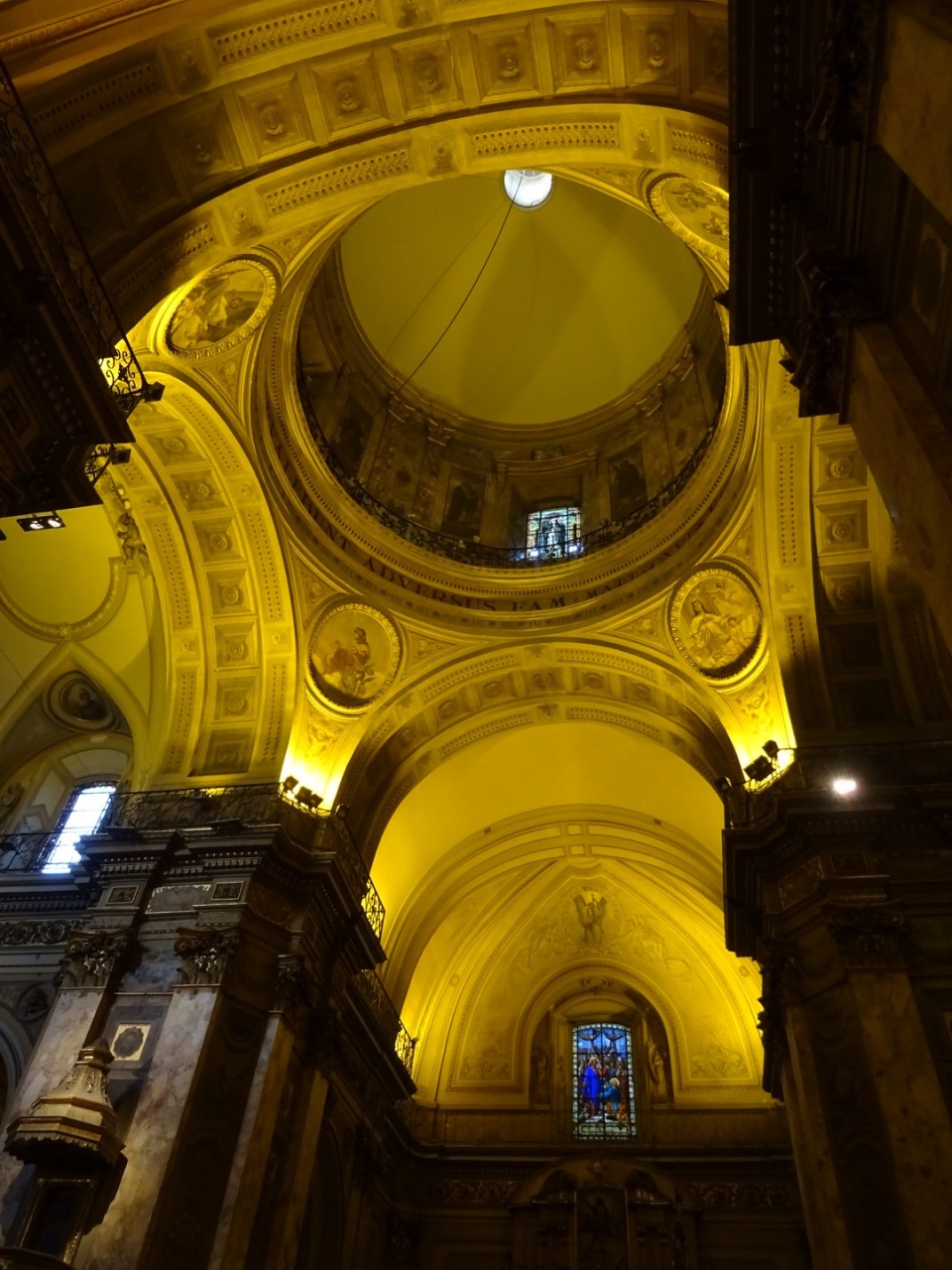 Dogs & local park:  we spend a lot of time next door at our local park.  Argentine’s love their dogs – which is quite different than Chile.  But we see dog walkers taking 6-10 dogs a time to the park and to the dog play area to have fun.  Most seem to be golden retrievers, but boxers are also very popular.  The dogs spend a couple of hours then you see the walker take them back down the sidewalk to their apartments.  What’s amazing is how many big dogs there are here – you’d expect lots of small dogs – but that is not the case.  WE also have the local vegtable market across the street on Saturday a.m. so we had to buy som fresh produce – this is how you really learn words for new things…  We went to the zoo as well, pretty good, you get to feed the animals as you go. 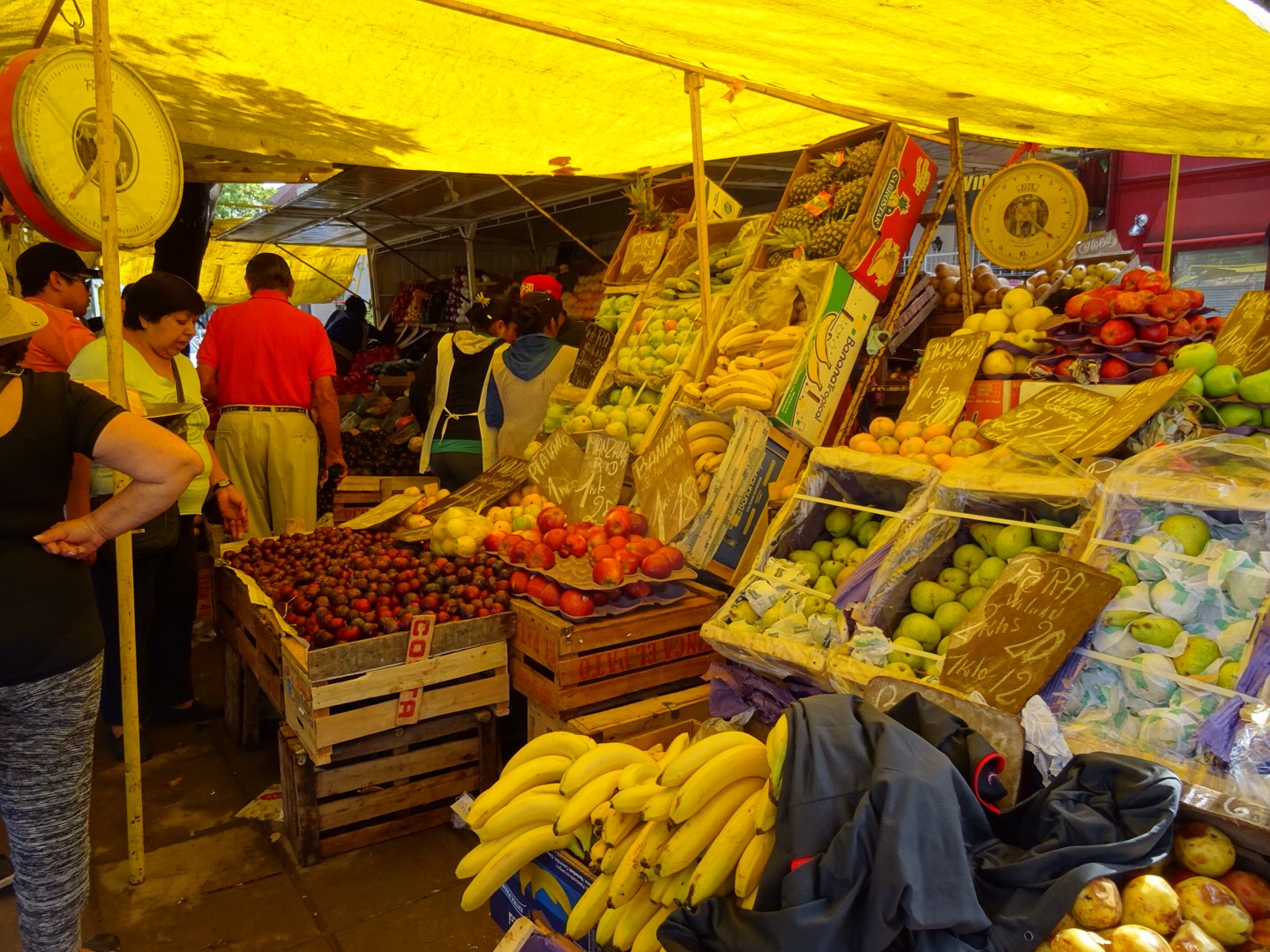 Local produce stand – once per week outside our front door.

The 2nd best bookstore in the world according to the Ny Times. It’s in a 100 year old theater.

Sitting outside at a cafe, under a huge tree.

Red Panda at the zoo 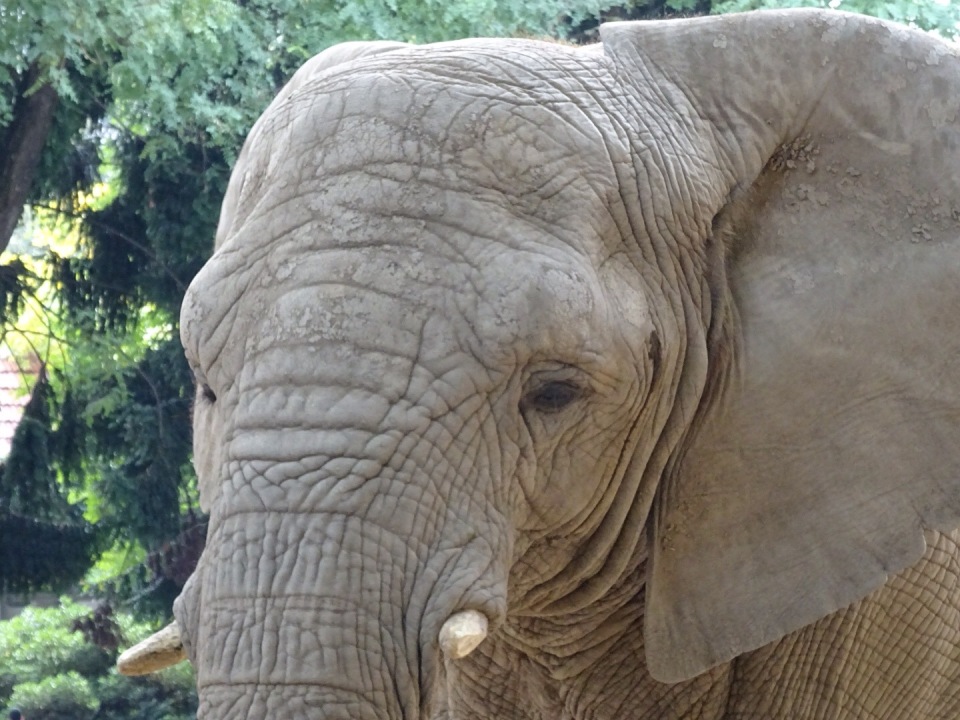 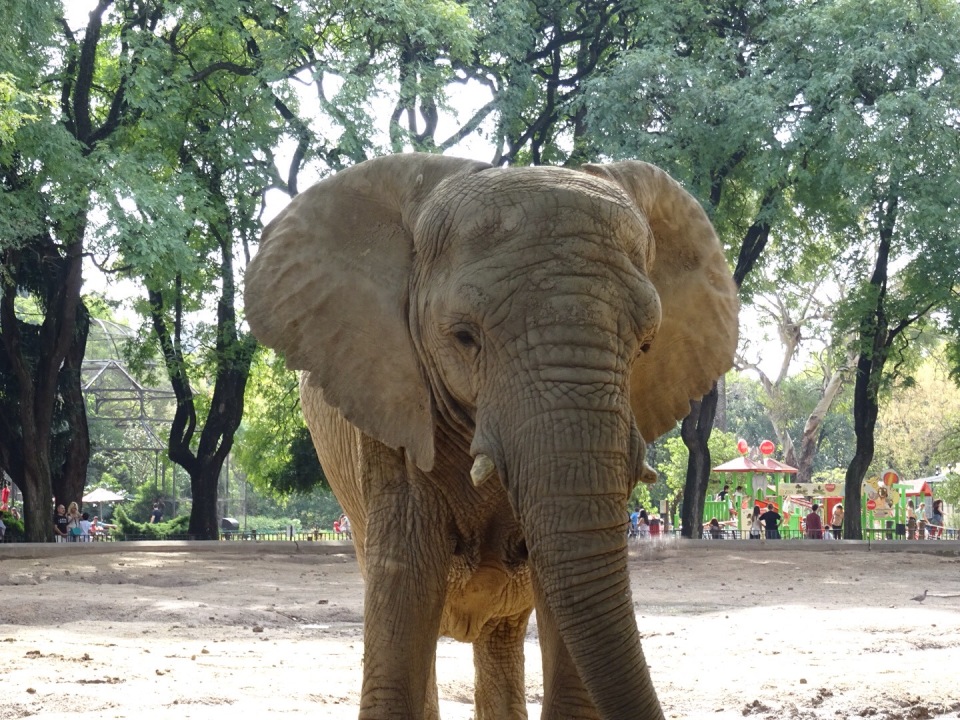