An old car in Colonia

Two days ago, we took a Buquebus Ferry, Atlantic III, over to a smaller town in Uruguay called Colonia, which is close to Buenos Aires but far enough away that you can barely see It across the river.  Colonia is a town that was an old Portugese fort founded in the late 1700s. You can see some of the old fort wall, and some of the original streets, paved by the Portugese when the fort was first founded. We walked along the River Plate, or Rio De La Plata, which is natural border between Argentina, and Uruguay, to this small resturant which was originaly a windmill, where we had a great meal, and found a very nice dog as well. One thing about Colonia is that they really like old cars, so every block, we would see a very cool car or two.

The resturant we ate at in Colonia

Our ferry to Colonia. look at how the ship is propelled

One of the original streets in Colonia

There is a old marina in Colonia where if you were to sail out of BA, you could stop there and enjoy the town before heading upriver, to Montevideo, or wherever you want to go, which we looked at, and there were a decent amount of boats there, which were mostly sailboats. Just one thing. If you would like to head to Colonia on a small sailboat or trawler, be careful of the tides, because most of the boats, were about to run aground, the water was so shallow.  when we were walking back, we stopped at the local lighthouse and went to the top to go take a look around, and wow, we got a view alright. You could see all of Colonia.  After stoping at the lighthouse to take a look around, we went to go catch our bus to Montevideo.

My family on top of the lighthouse

Some of the buildings in Colonia 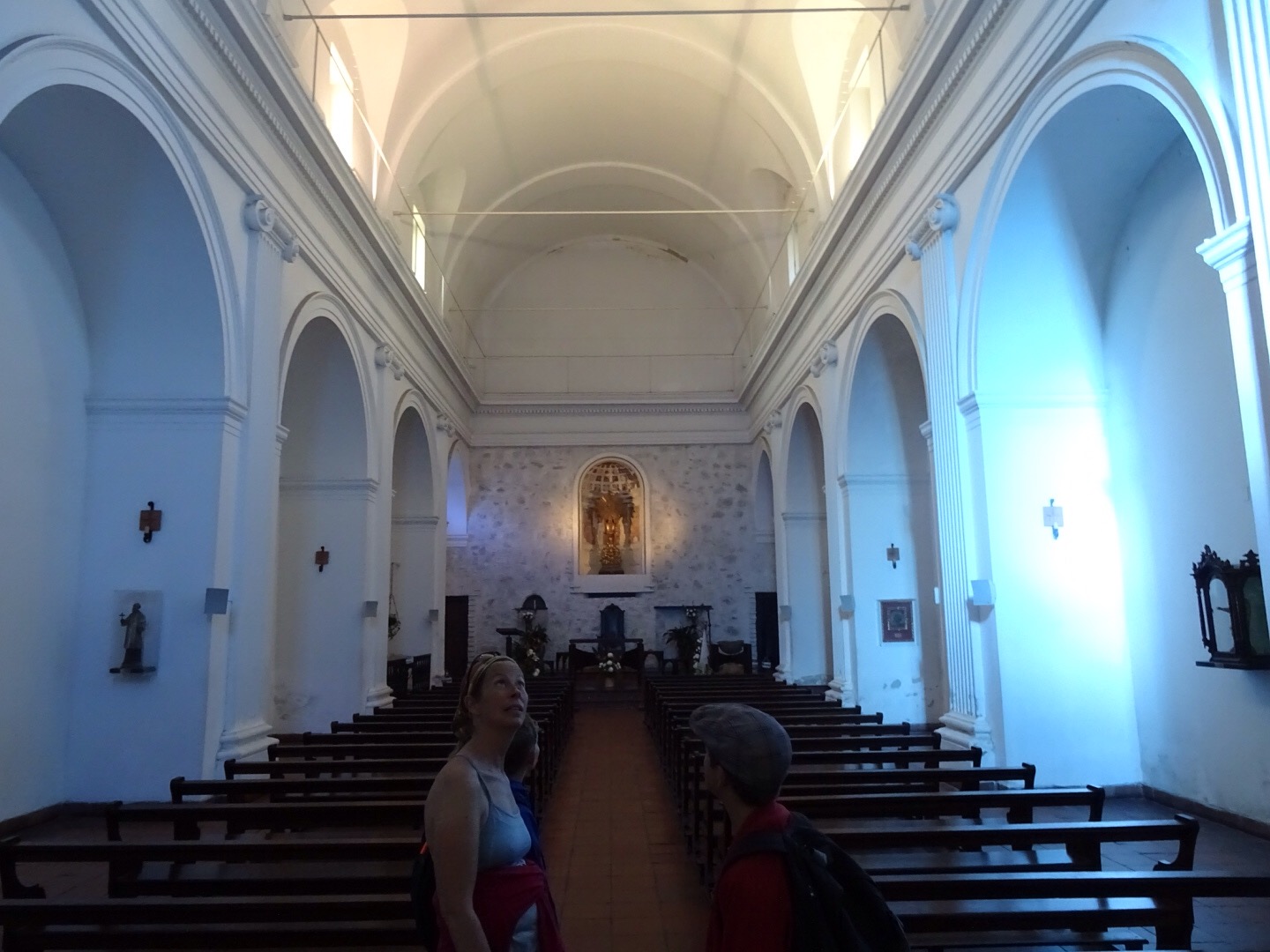 The church in Colonia

After a 2.5 hour bus ride, we finally made it to Montevideo. As soon as we got in the taxi line, we thought, “Hey, since we are in the capital, there would be more taxis, right?” well, yes and no. There are more taxis, except the day we got there, the taxis were on strike! So, here we are, standing in a line for just over 2 hours when we finaly get picked up by a taxi, as soon as we got in, he took off. ” Does this guy think he’s playing Fast and Furious?”, I thought to myself as this guy wrecklessly drove through the city at very high speeds. When we got to our hotel we crashed for the night, and from there, everything was fine.

Onboard the bus to Montevideo

So, after we checked out, we decided to hit old town Montevideo After all, we had 5 hours to kill. So, we walked down to this huge square, and in the square, there was a Monument. Next to the Monument, there were stairs down underground. My dad said they led to parking. Wrong. It actually led to a tomb of a very famous general in the history of Uruguay. After seeing that, we continued down this street that reiminded me of Florida Avenue here in BA. Florida Avenue is a huge avenue that is only for people in the middle of BA. This was like Florida Avenue, except on a smaller scale. every 10 or so feet, we would walk by a local vendor that would be selling another cool item. After 7 blocks of market, we hit the water. we were next to the port, so we would hear ships horns every so often,and see huge stacks of containers. The sad thing is is when we were walking down to and from the water, we would see McDonald’s and Burger King.

The statue in Plaza Independencia

Of all the restaurants in america…

A very close replica of a building in Buenos Aires

The underground tomb of a very famous gerneral

After we left the water, we walked back down the market avenue, and we hailed another cab, and drove to our friends, the Boyds, who are staying in Uruguay, and teaching at an international school for a year, and went to a very good pizza parlor, where Jeff’s students were showing off pop art. I met one of Lincoln’s friends, named Duke, who was very nice. The only problem, is that while we were talking with some of our friends, there was this realy annoying kid who was throwing stowns over the wall at us, and when we told him to stop, these four mean, bloodthirsty dogs would jump up, almost ontop of the wall. Thankfully, this happened before food was on the table. After leaving the parlor, we went back to the Boyds’s house and we spent the night at our friends house.

A building in Montevideo

The road to the Boyds

In the morning, we said goodbye, and we went to the Port of Montevideo via cab, and got on the Buquebus ferry, Francisco to return back to BA. The thing about the Buquebus, is that their ferries are hydroplanes, or hydrofoils, so the move really fast, and when I say fast, I mean 50+ knots an hour.  When we got back to BA, we went and looked at this really cool square rigged sailboat, that was right next to the port. Apperently, it was siezed from somewhere in Europe by this billionare and sailed it back to Argentine waters. And that,my dear readers, is how our Uruguay adventure ends. Stay tuned for more.

Looking out the back of the ferry to Buenos Aires

The ship siezed from somewhere in Europe