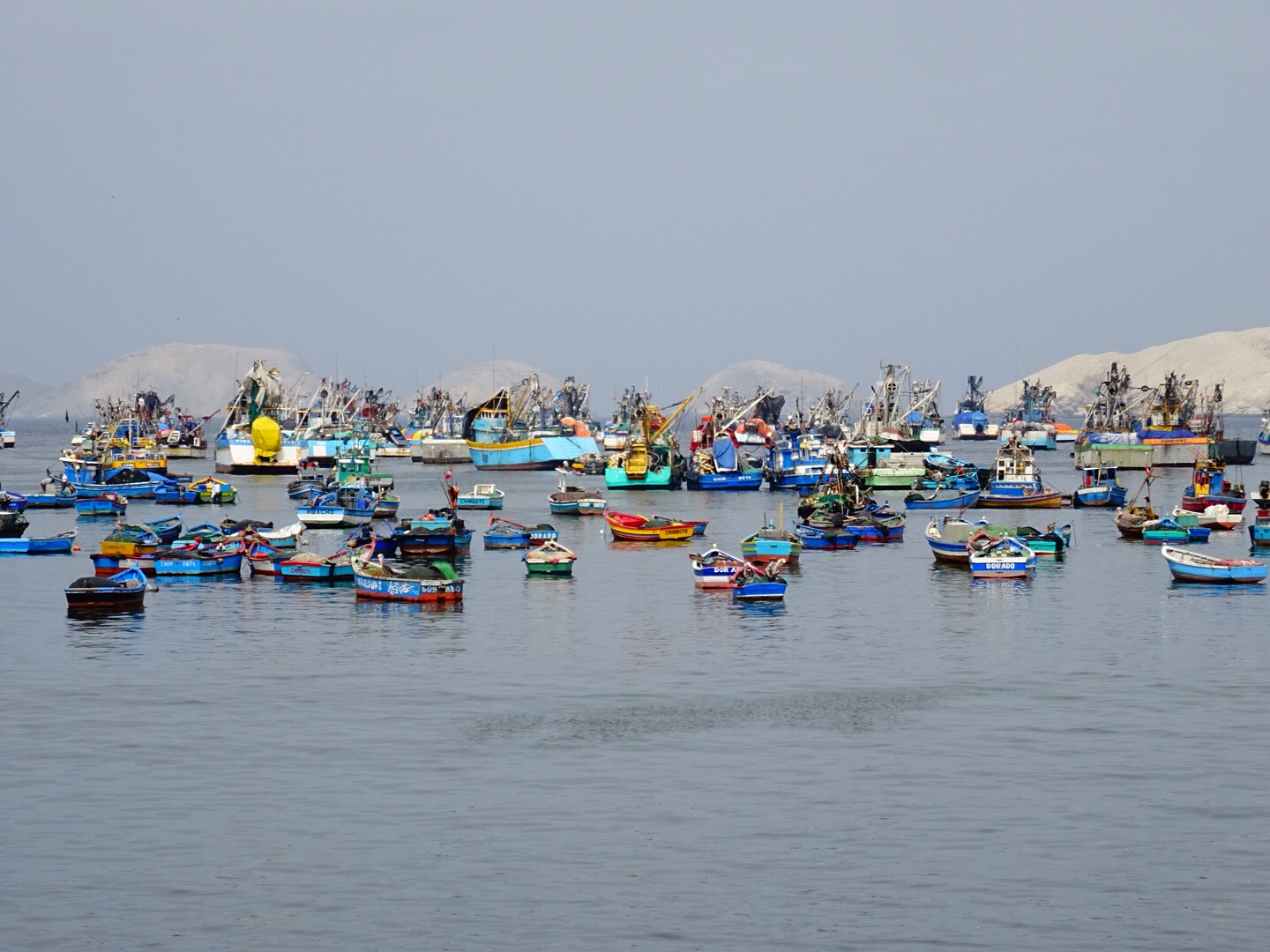 The entire fishing fleet in harbor on the way to Trujillo.

So we have been in Trujillo Peru for three days now.  This is a larger city on the coast, north of Lima.  It’s kind of crazy here, the city is basically foggy all the time – can’t see the sky at all.  You are right next to the ocean but really cannot see it – you can hear it though.  There are also mountains here, that you can’t see unless you are next to them.  We have been to two sites of interest, Huaca de la Luna and Chan Chan – both here before the Inca, and both conquered by the Inca.

This is the fog here – all day.

Huaca de la Luna is an amazing spot with a huge temple that was built on top of older temples.  Basically this was a religious temple where they performed human sacrifices of soldiers who lost in a form of dancing battle.  There are some impressive things going on here as it is an active archeology dig site.  For one, a lot of the area you canot goto because it’s under excavation.  Second, there is this huge wall that they uncovered within the last 20 years.  Honestly don’t know how you miss a wall like this, except that everything was deteriorating.  See a picture of the other palace that hasn’t been restored.  Grave robbers came here, but missed many of the items – so many artifacts have come out of this site. 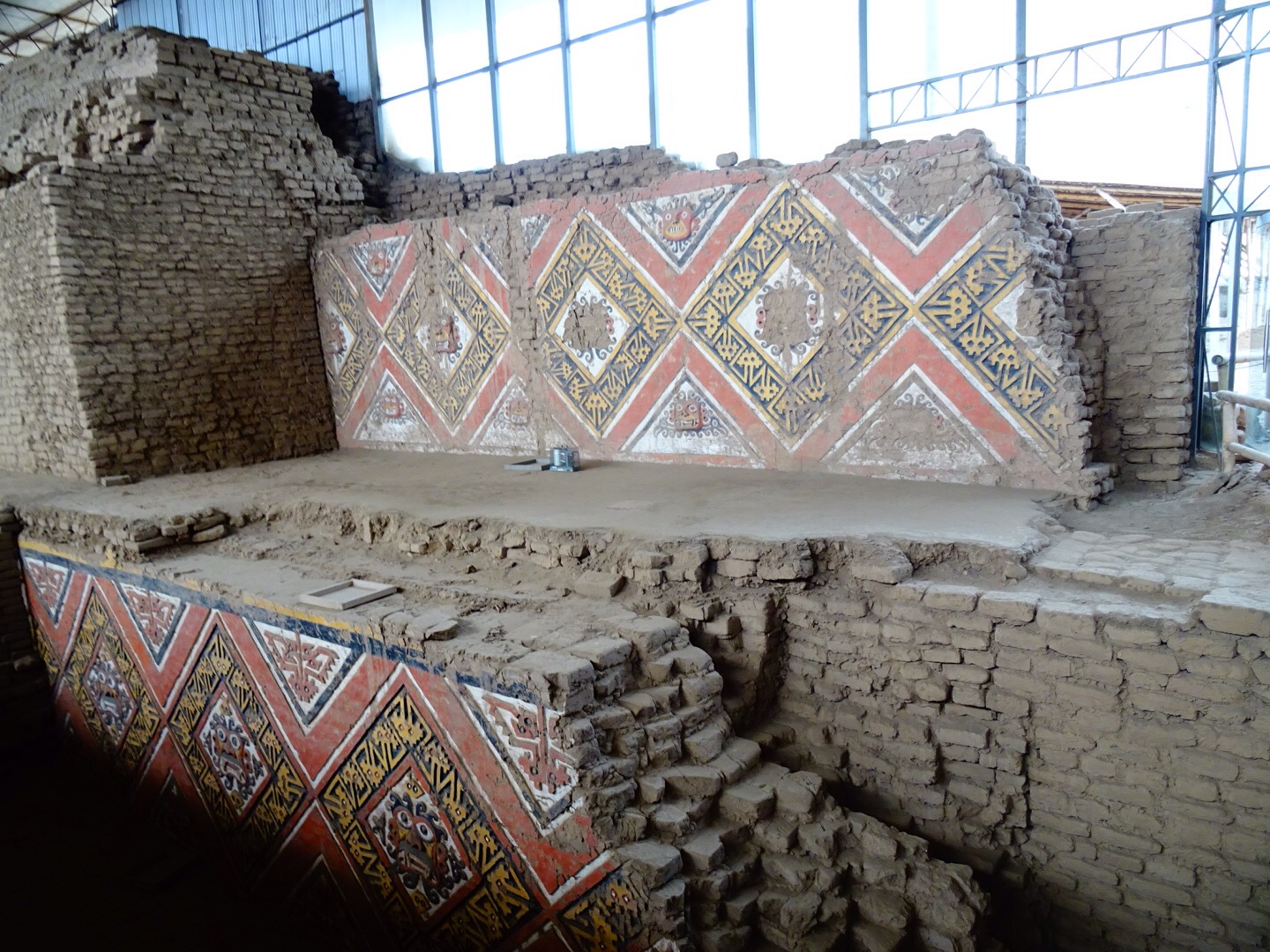 Some of the uncovered interior walls – they were buried under adobe bricks.

This is looking down from Huaca de la Luna at where the town/city/area used to be.

This is another site, and what Huaca de la Luna used to look like before excavation. 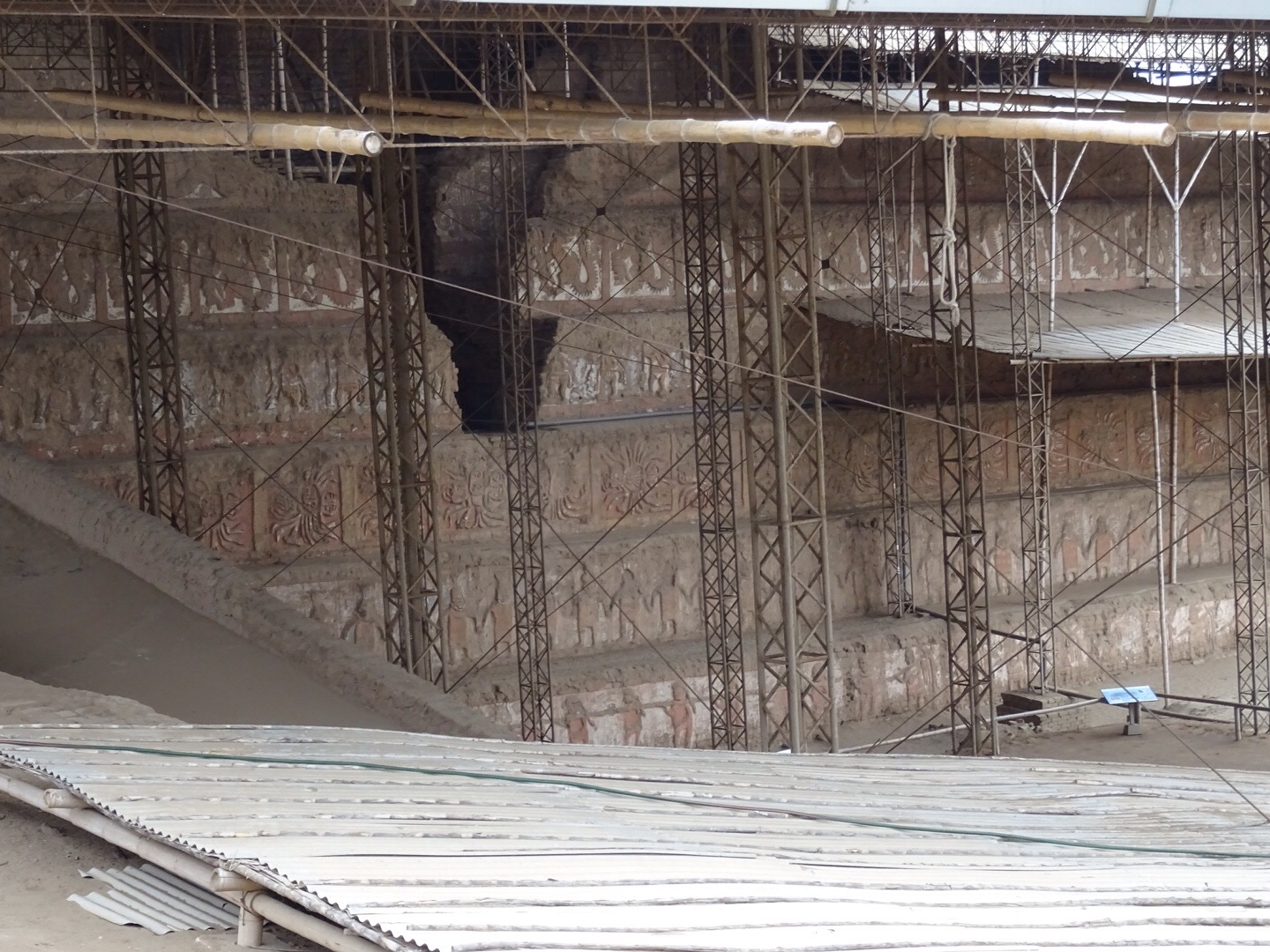 The uncovered wall . Each level has a different symbol/story.

Chan Chan is the other site we visited today.  This site is one of ten temples that were built over a period 600 years.  On average each temple took 50 years to build out of adobe.  This one has been restored in great detail.  It’s hard to believe thousands of people working here.  Most of the common people lived outside of the walls, the site itself was the residence of royalty/priests/etc.  The walls here were 12 meters high on the outside.

interior walls inside the temple. 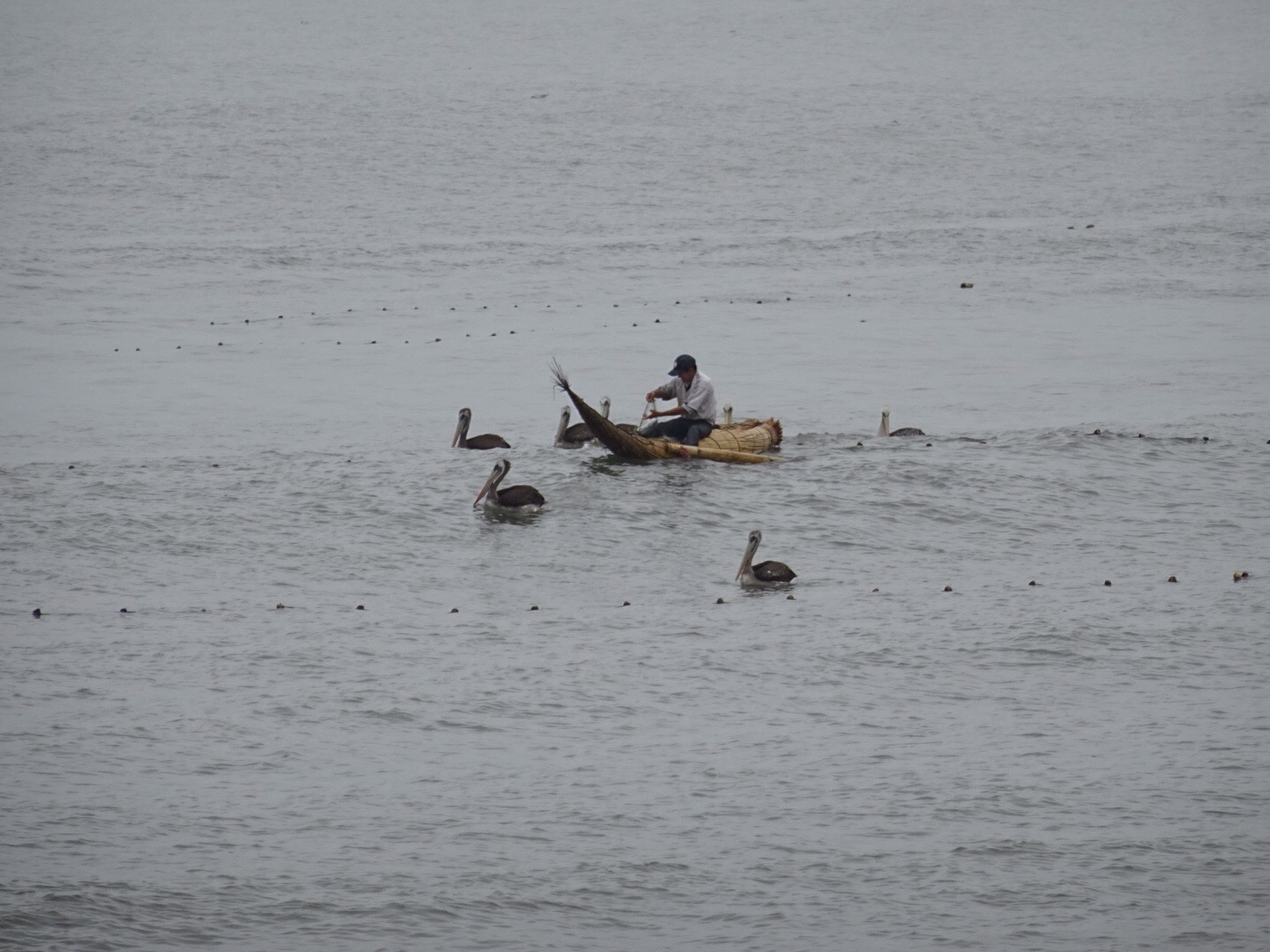 local fishing guy on a reed boat – they rebuild these every two months. 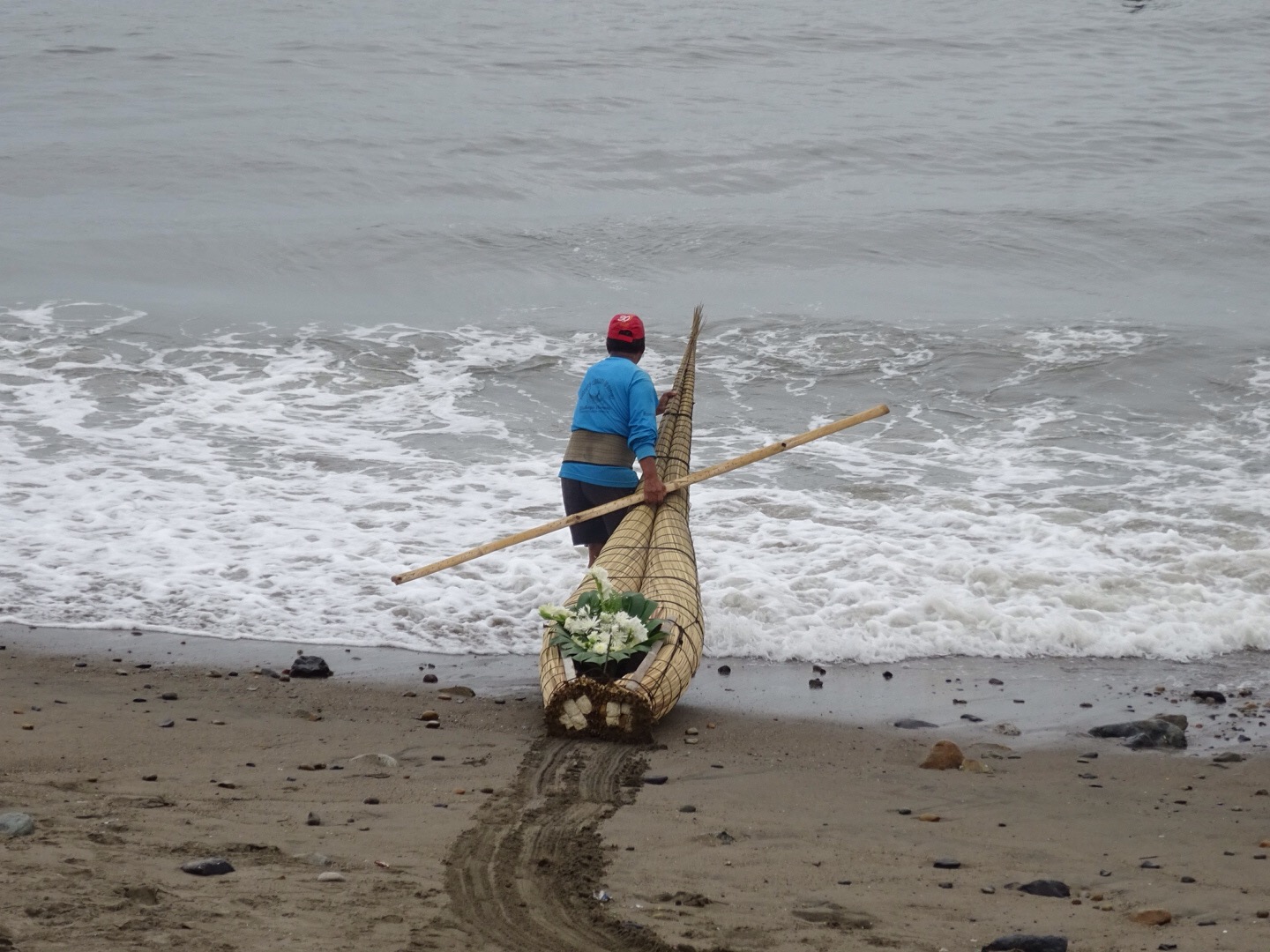 this fisherman was taking an urn and flowers out to sea for a local family.

So we have all been having some gastro-intestinal troubles off an on.  Figured that a picture of the progression of remedies should be taken.  Today I decided to mix-match, so took an immodium with pepto.  Sort of grossed everyone out, but fun nonetheless.  Everyone seems better tonight.  I had a case of food poisoning about a week ago, which was no fun but we are over it.   It’s good to experiment with the different food items, and I’m glad the boys will try new things – however when you need bottle three it really isn’t fun at all.   I figure this is better than writing about my shoelace…