Well we have been offline for several days staying at Bahia Bustamante on the coast of Argentina.  When you first trying to get here you simply drive along RN/3 (Hwy 3) then you get to a gravel road that cuts off the highway.  You do a double take, making sure this is the right place, then realize it must be and start driving down the gravel road.  After about 5 KM you are driving through multiple estancia’s – and seeing sheep, Guanaco’s (llama’s), and the occasional Rhea (mini Ostrich) running along the road.  It’s a bumpy downhill ride then smooths out as you head towards the ocean – simply wondering where you are going and whwat you will find when you get there.  After about 45 minutes of driving on this road (45 KM) you get to Bahia Bustamante.  At first glance you feel like you arriving at a closed factory next to a beach with no one there… but as you drive forward you realize you have arrived at this very small town and your home for a couple of days.   Special Note:  if you find Bahia Bustamante on a map – looking to the East, the next landmass is New Zealand – so we are definately still down here a ways.  Realizing that we aren’t even above the tip of Africa after several days of driving was pretty good for the fellas.

Driving the road to Bustamant

The houses where you stay – they used to be for employee families who worked here.

Old storage area – b&w makes it look like it should.

Tidepool at low tide. We walked out on the point which is amazing. 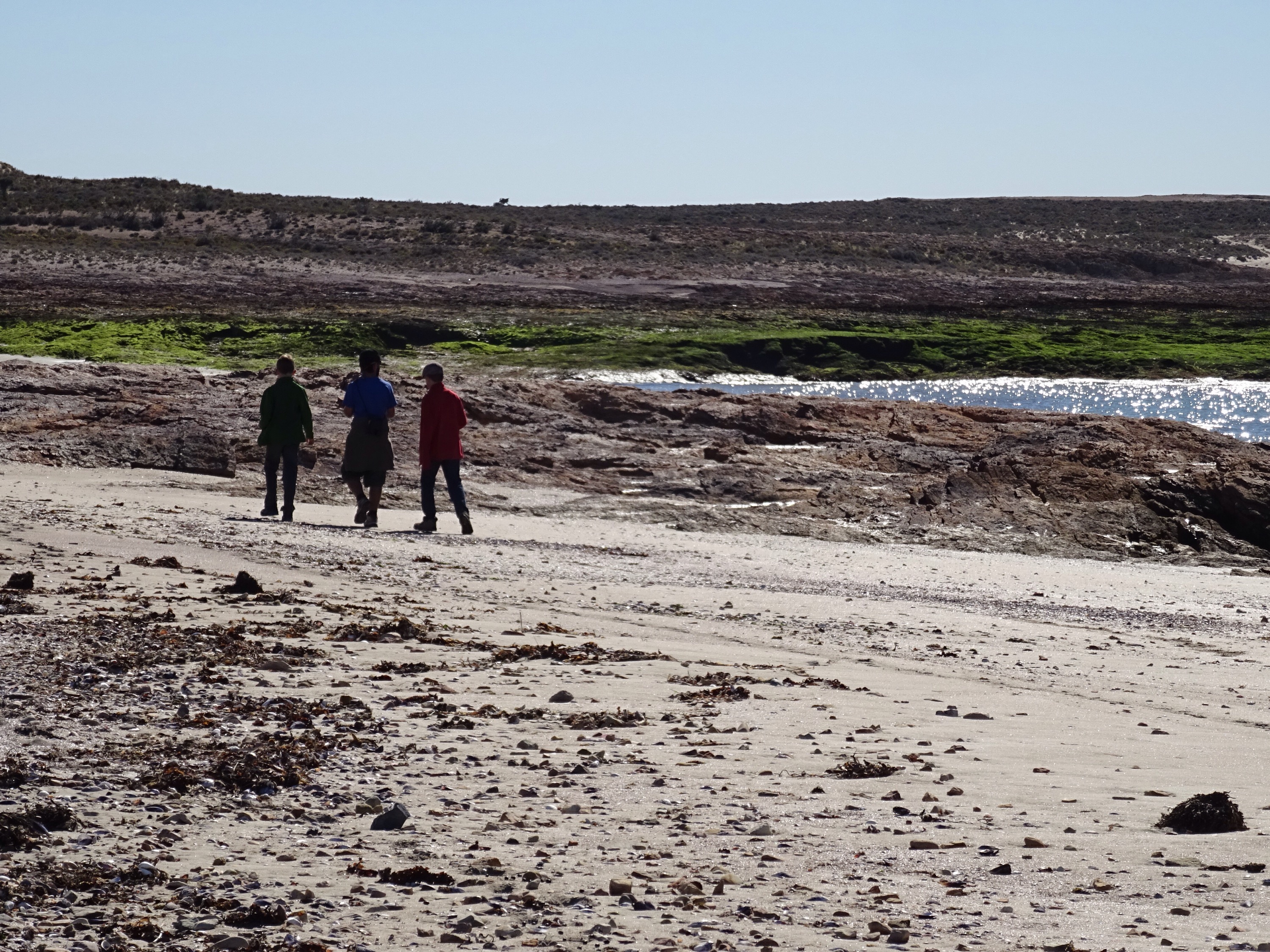 The boys walking with our guide – we were the only ones on the tour this day.

Bahia Bustamante was written up in the New York Times (here), and Cindy found it via one of our travel books and then the article.  They do little to no marketing and only let about 400 people in per year.  You are taken to your little house on the beach and realize that you have entered an old world place, stopped in time.  The power comes on from 7 pm until midnight, the interenet doesn’t really exist, the food from what you see around you in the wild, the animals roam without fences and you really have been transported out of 2015 and back in time.

Food:   the most spectcular feature of this place is the food.  The chef is amazing and does a great job with the limited supplies they have.  The nearest store is about a 1.5 hour (one way) drive – so he uses what he has at his disposal – sheep, and ocean and a small garden.  We ate very well, suprisingly well I will say given the cooking conditions.  Bahia Bustamante is an old seaweed production facility and the chef has access to various varieties in his cooking.  One thing he prepared was leg of lamb that had been covered in very small pieces of nori and then pan fried – it was outstanding.  We also had pasta (home made) with seaweed as the flavoring agent.  Sometimes the tastes were overpowering, but they were excellent.  We ended up having sort of a free day yesterday and the boys helped in the kitchen for about two hours.  They made bread from scratch, rolls with cheese and helped out around the kitchen.  This is with a chef that speaks no english – so Hayden negotiated and they did a great job following directions and learning.  For Cindy and me we couldn’t be prouder of our not so little anymore chefs helping and learning.  The staff even commnted how unusual it was for people to want to come and work with others in the kitchen.  Cooking is a universal skill and people from all walks of life enjoy it – so having the boys enjoy it has always been a focus – and they are taking too it nicely.  Hayden even said the other day he would like to be a chef.

Lamb with seaweed crust, on potatoes with red peppers 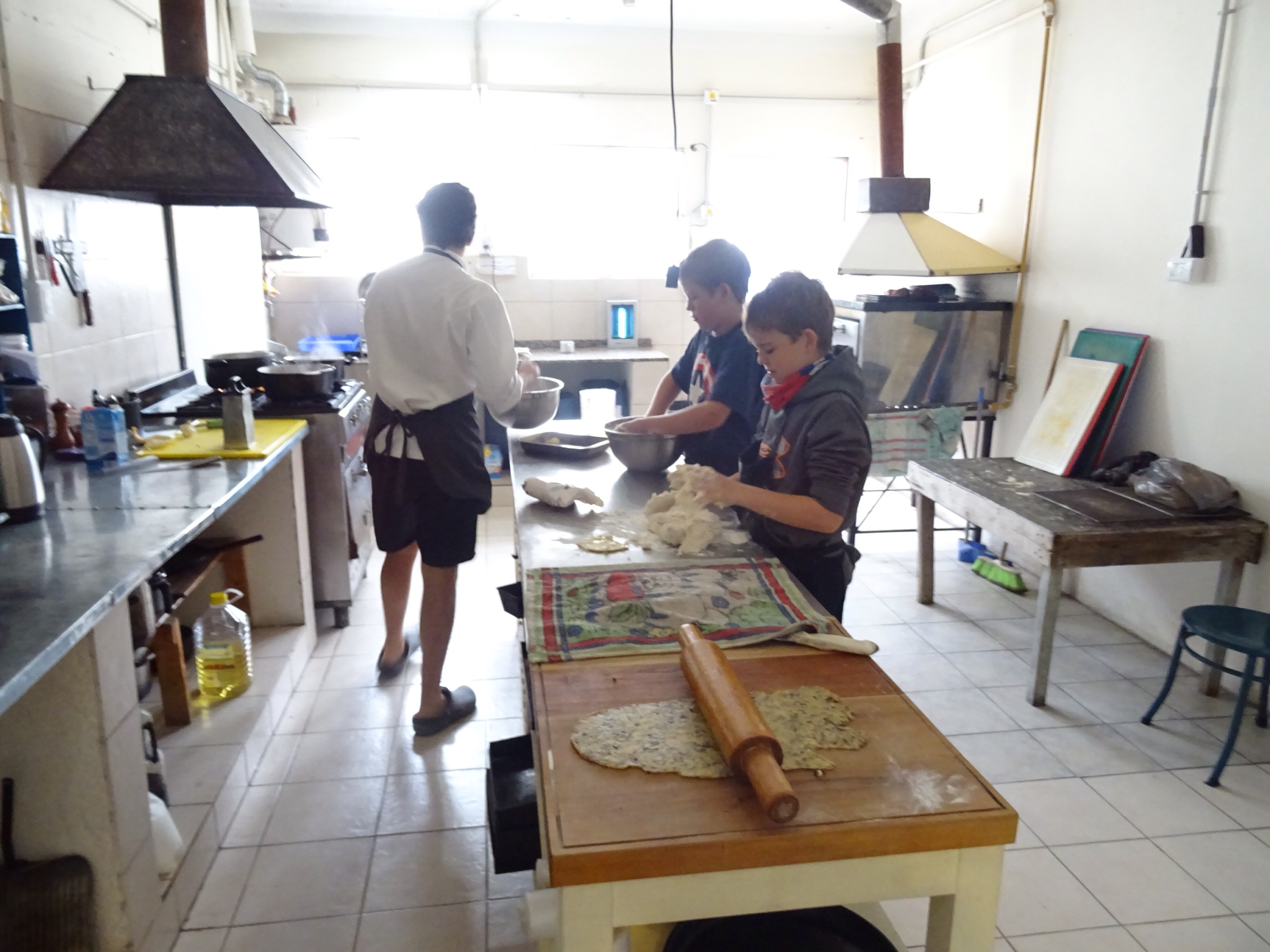 The chefs in the kitchen making bread. Note the simple kitchen – the meals were amazing.

Simple is best – soft boiled egg on home made toast with simple garnish.

Penguins?  Anyone seen Penguins?   Part of our journey has been trying to see a penguin – we missed them at the tip of South America – so we wanted to find out if they were still around.  The guide said “disappointingly” that the last trip he only saw two – I looked over at Cindy who I could tell was a bit worried that we have come all this way and won’t see one in the wild.  I told her that we can always goto the Denver Zoo and see them…  Penguins leave these shore islands about mid/late March and then goto sea for about 6 months and don’t come back to land.  They end up going north off the coast of Brazil – so we were hoping that they haven’t left.

We eneded up going out on the boat on our second day – thinking that we wouldn’t see any – to our suprise we saw hundreds in their native habitat.  Typically there are more than 60,000 penguins on this one island/area – which is hard to believe since we saw several hundred and they were making quite a racket.  60k I can’t imagine.  We were all very excited to see our black and white friends – who waddle on land, but race like a finely tuned machine in the water.

Sea Lions?  Zesty where are you?  So after motoring past penguin island, we turned to hear and see hundreds of sea lions.  The boys instantly started poking fun at Zesty saying that we have found her true home and source of her fatness.  Watching the sea lions lay in their bigness on the beach and snoring well it’s pretty similar but they can’t fetch so that’s that.   The young sea lions are there staying near the shore – there were also hundreds making a huge racket – plus others swimming near the beach, near the boat and generally checking us out.   Bahia Bustamante doesn’t have killer whales circling about like other places, but generally I think the open ocean is a scary place for a 4 month old sea lion.  We spent about an hour circling the island, taking pictures, seeing birds, and more animals in their wild habitat.  Not many humans come here and it shows. 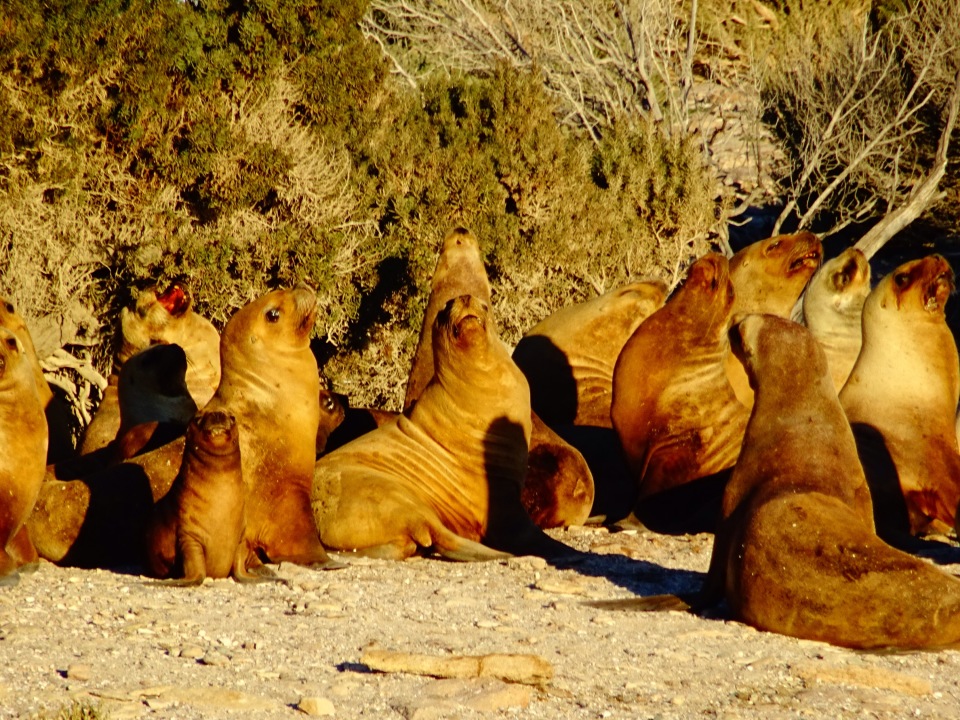 Bahia Bustamante – Seaweed gone bad?   This place used to be a seaweed production facility with over 500 workers harvisting seaweed directly from the shore.  Now there are ten employees who must go into the ocean and cut it to harvest.  One thing I kept noticing were the university research reports that we read indicating dolphins, orca whales, and generally an abundance of sea life here through about 2000.  The owner – a direct decendant from the founder said that when he was a boy he would see dolphins 8 out of 10 times they would go out in a boat.  Now if they see them the entire town will come running down because it’s so rare.  They attribute the changes due to less sea weed being in the water, less fish hiding in the seaweed beds, thus things have changed in this once so great place.  I think they are doing their best to manage what they have and hopefully mother nature will restore the marine environment to it’s full luster since so few humans are there now.  The owners ave been here since the 50’s and will continue to manage things.  Maybe eco-tourism will help remove the harvesting of seaweed financial need.    I couldn’t help but think that maybe they over did it in the past – but I’m not sure that’s the right answer.  If you want evidence of things changing in the world you can simply look at this place and see the change.