Old Training Ship – about 19 Trips around the world for Argentine Navy.

Ok – I typically don’t write or comment about products in general.  But I’ve spent about 1/2 the day dealing with a broken shoe lace and it’s sort of put a twist in my shorts.  This is my secon pair of this exact La Sportiva Shoe – the first pair split in the leather so JAX did an exchange for this pair.  Personally, my expectation is that a shoe should be designed to last more than three months.  My first pair I got a summer out of them doing all sorts of scout related things, but then the leather split right before our trip and they were a no go.  Since the shoes fit my feet so well I elected to simply get the same shoe so I didn’t have to spend $125 again.

Feeding together the sewn together old and new laces to go around the entire shoe.

Ok, the shoe has been great but the other day I noticed one of the laces was starting to split a bit, then the next day the outer lining on the lace splits.  See these shoes the lace goes all the way around your actual foot and then up through the bottom and through the zig-zags to get tied at the top.  Looks neat and probably needs to go into the “feature” bucket more than the “function” bucket.  Did anyone ever think – what happens when a lace breaks?  See the laces pull and tug on themselves and basically acts as a mini knife on the actual lace.  A traditional hole is smooth so the lace doesn’t necessarily ‘cut’ everytime you pull on it.

Here’s the bad news – finding a new shoe lace that is that long.  Uh huh, you go up/down shoe stores – the longest lace doesn’t even come close – so you end up figuring out how to engineer your own lace.  To the La Sportiva shoe guys – this process really sucks.  Especially when these laces lasted three months of actual wear/tear in the treking world.  These shoes have been all over Chile and Argentina – but the truth is it’s only about 90 days worth of wear/tear.  Maybe an extra set of laces in the box?

Anyway – I found a camping store, found some new rope and then began the process of sewing together the old lace with my new rope – then pulled it all the way around the shoe – then whipped the ends and burned them a bit to make sure they would work.  I have a feeling this will be temporary and I’ll end up re-doing them somewhere in Peru, probably when I least need to be fixing a shoelace.

It does make you think sometime about form vs. function and how useful some ideas really are and once they are tested in the real world if companies actually change their product design based upon real world use.  My guess is probably not.  And I love La Sportiva shoes – I have a set of hiking boots from them that are great.  Maybe when I get back to Boulder I’ll take them my shoes and let them see miles and miles of use to improve their product.

Ok, enough ranting for the day.  We had a rough night last night – our neighbor is a ‘music’ lover and likes to have people over to party late in the pm/early am.  A woke up early to a strange music literally blaring in our window – looked at the clock – 5:30 a.m.  I said “cindy you awake’… a “yes”… Come to find out I slept a bit, but Cindy got no sleep all night.  She tried to move to the boys room at some point but some guys were hanging out on the street being very loud.  So she is now napping.  However we are expecting a full on party tonight since the last two weekends have been party nights.  We discussed going to a hotel tonight but that feels really bad on the wallet.  OUr landlord told us the other night that a lady who was staying here before (english) who went down and confronted the guy in the middle of the night – he slammed the door in her face and turned up the music.  He’s a DJ from Columbia – want to mess with him ?  Probably not – although the idea of picking up a huge bag of dog poo from the park next door and dropping it down into his party during the night had crossed our minds… Well two more nights here then back on the road!  Onwards and literally upwards we go.

The wheel of the ship. 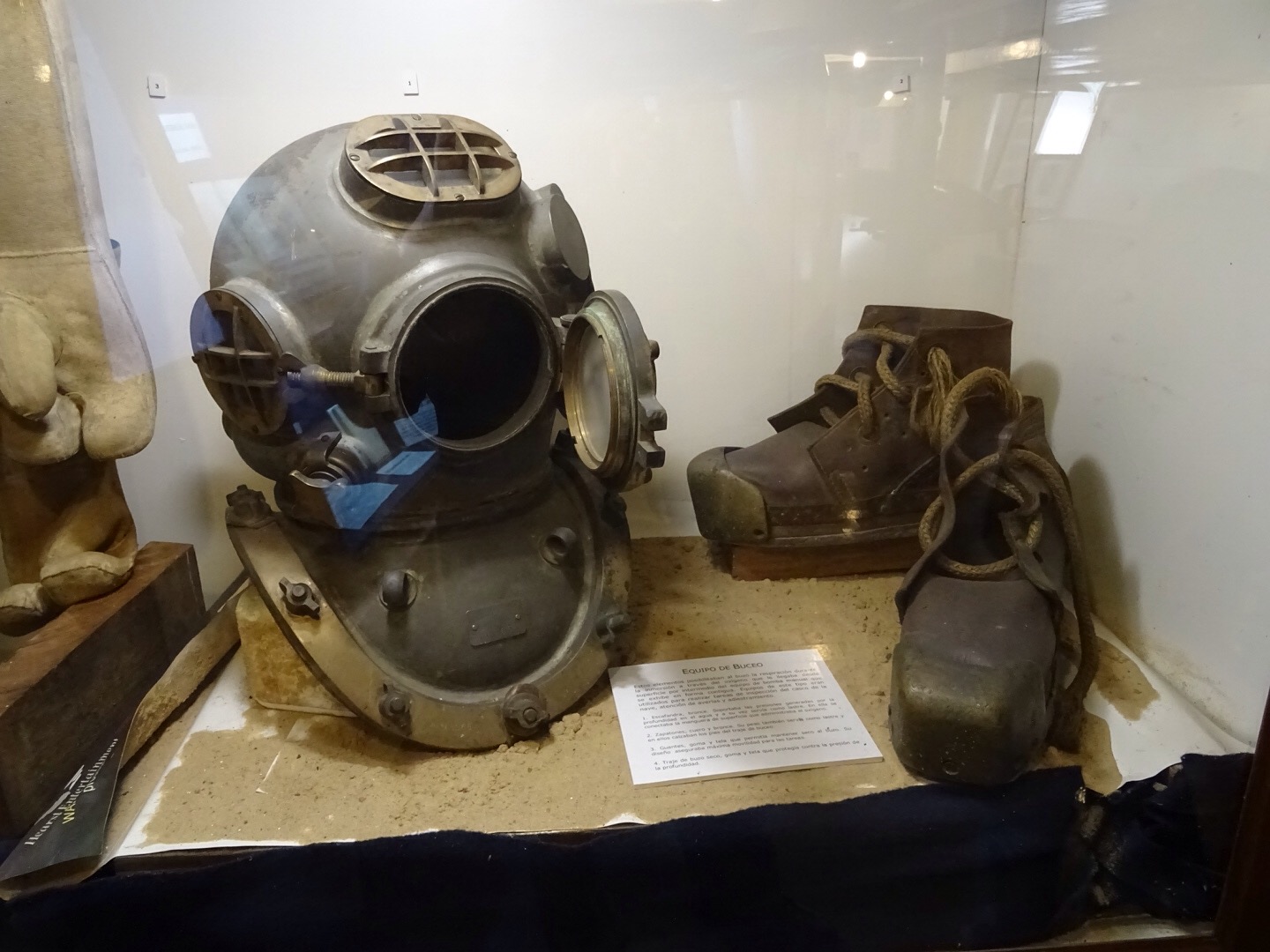 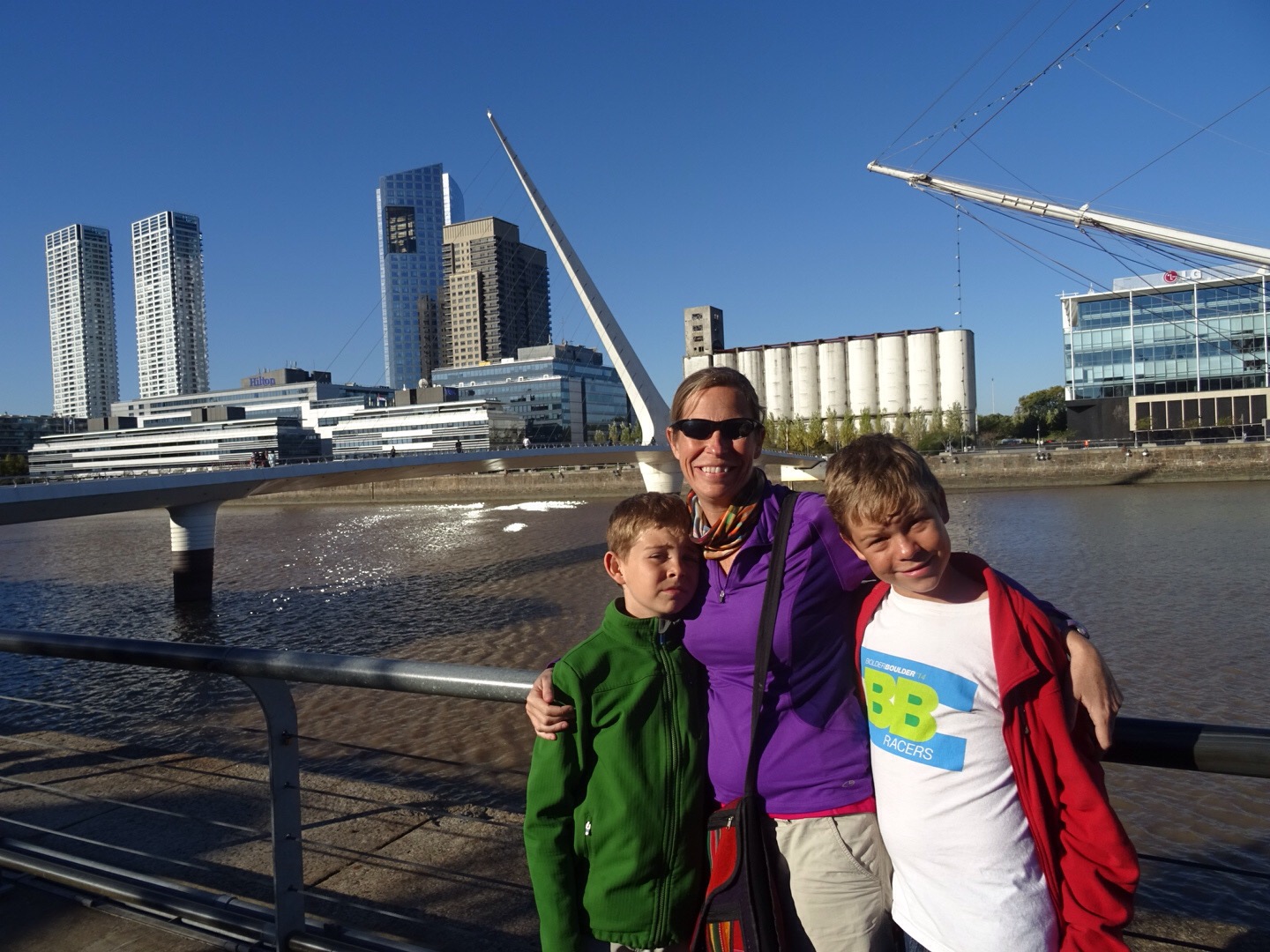 Hanging in front of the pedestrian walk way.

The new downtown/highrises . These places are $350k+ and you don’t get to have a mortgage in Argentina, you have to pay cash. 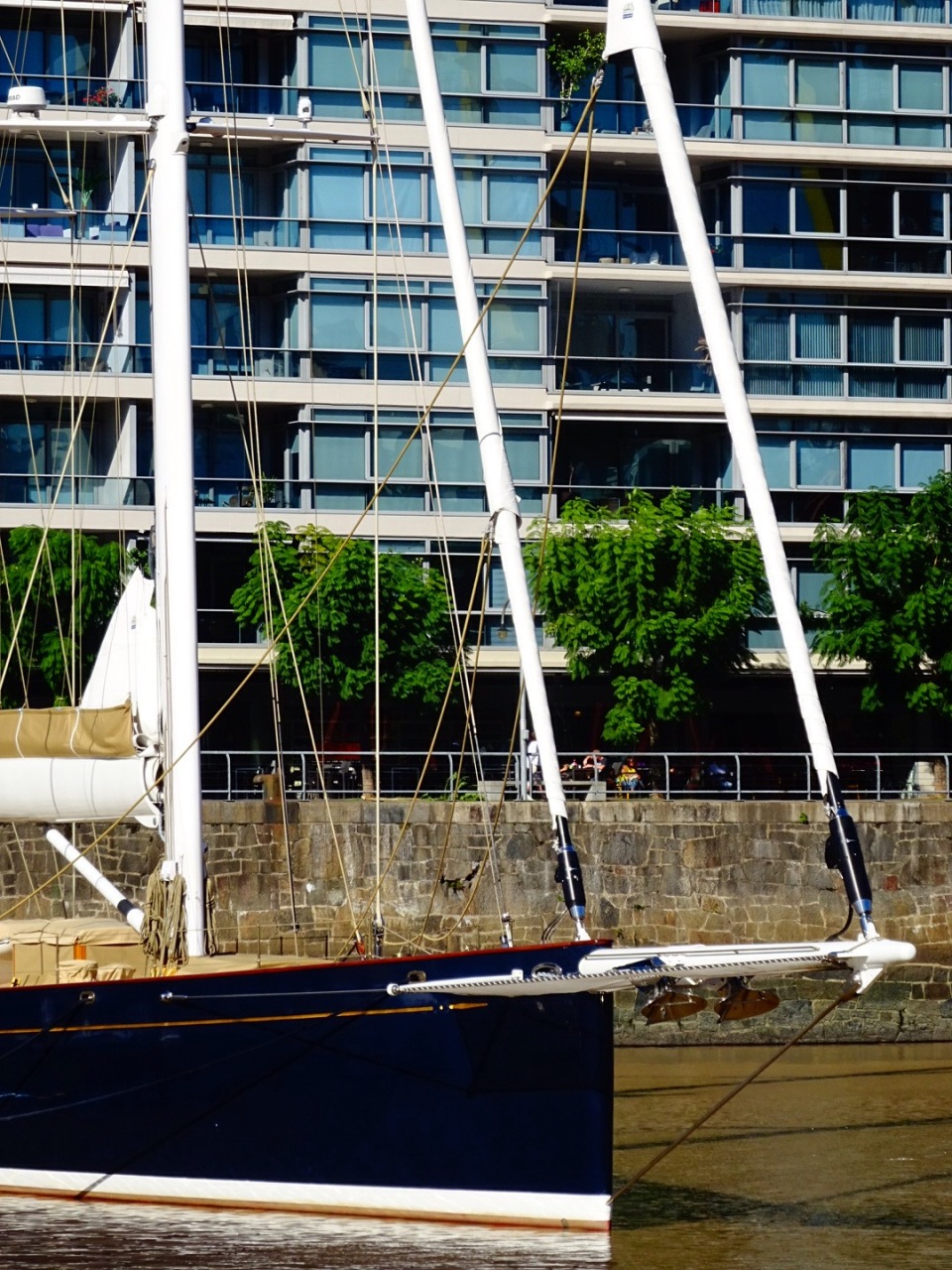 The Punta de La Mujer – crossing of the women, named for women since so many roads are named after men. It opens by pivoting at the big piece in the middle and simply rotating to the side.

Gunner at the ready. 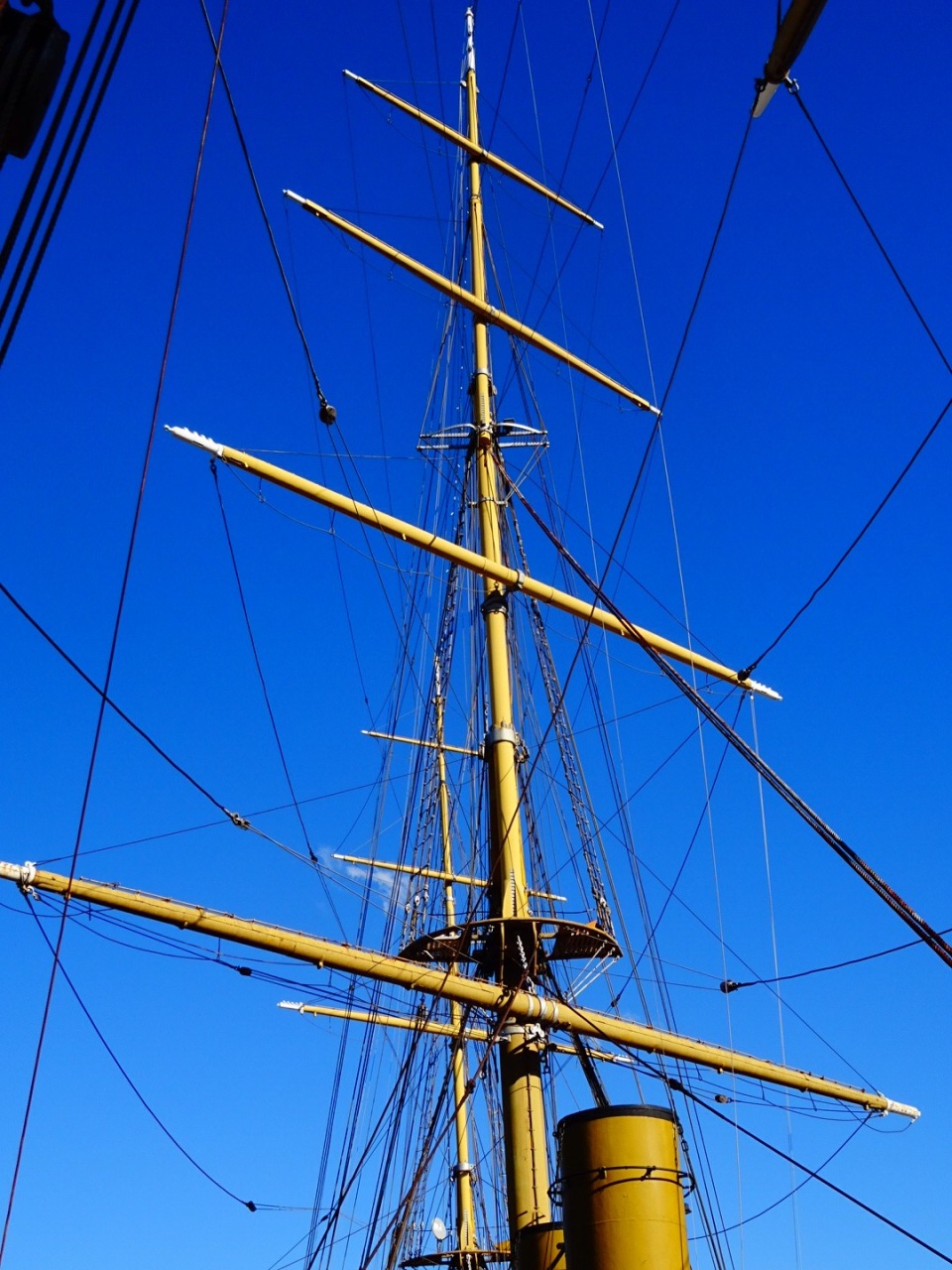 We did spend yesterday visiting La Boca – sort of a sketchy neighborhood but they have this one street that is really interesting and colorful so we went.  It’s the most touristy spot we have encountered in all of South America so far – people coming up to you wanting to take your picture with them ($), dancers at lunch, lots of trinket vendors, etc.  The scenery is nice, but it’s very much the tourist trap.  We then took a taxi to Puerto Madero and hung out.  This could be Seattle, San Francisco or Chicago – it’s all new – has Starbucks and we saw a TGIFridays.  All very polished and nice looking – one block away from the authentic Buenor Aires.  I’m sure there are those who like it more – it’s neat, not really what you are looking for.  You are sitting there looking at the offices of Oracle, etc.

Tango during lunch. Cindy could have posed but she didn’t have the dress on.

Hayden has become our “Bife” guy. His sandwich – it’s huge and he ate the entire thing.

My pasta. One thing about lunches here is that it’s not quick. Everyone has a nice lunch, but expect it to take at least an hour. 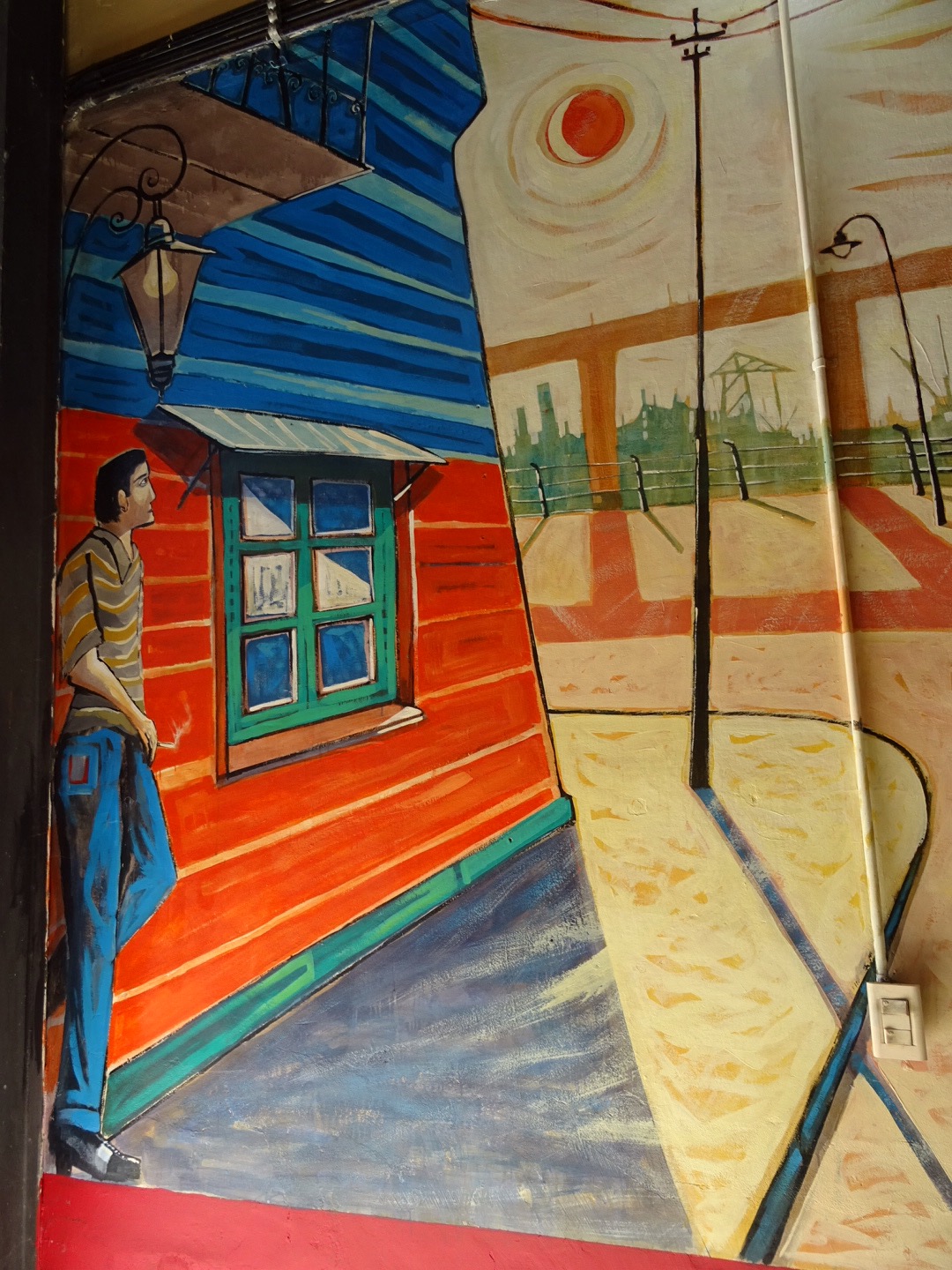 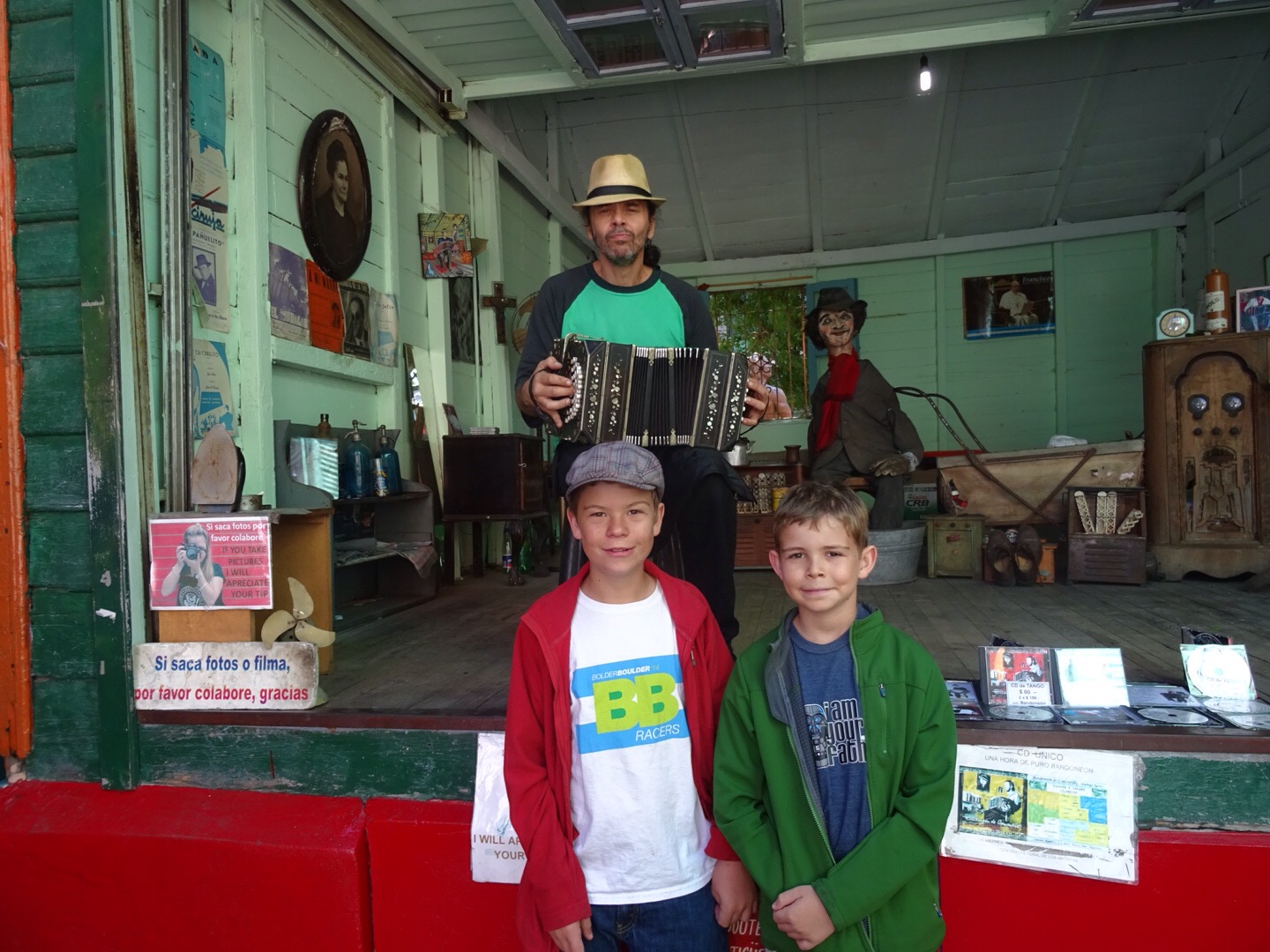 One of the Clinton’s was here – not sure who and when. Probably Bill after he was President.