Well we have been offline for almost a week now.  We took a ship from Puerto Montt to Puerto Natales Chile – which goes down the coast “inland” then goes offshore for a stretch of about 14 hours and basically in the sourthern ocean.  The boat trip was spectacular, however due to weather we were delayed leaving, delayed in route and delayed getting in.  After experiencing the ocean side of the trip I’m glad the captain waited to cross the ocean exposed part.  On the trip coming up they had 10+ meter seas (40 ft) and 60+ knot winds – going into the sea and into the winds – i spoke to the medic onboard and every passenger was sick.

The transit from Puerto Montt to Puerto Natales aboard Navimag is a good one.  We were able to put our car aboard as you are basically on a huge cargo ship that also serves as a passenger boat.  This is definately not a cruise ship – but it was comfortable and they served three meals a day.  The people we met were wonderful as it was a mix of people trekking, on vacation and working guys (truckers) taking goods to the south.  The boys were able to interact with people from all over the world – US, Argentina, Canada, Germany, Switzerland, etc.  always good to meet others from other places.  Everyone has a story to share.  People were very interested in taking your kids out of school and thought it was great that we could do that – in places like England you are fined if the kids aren’t in school – so i guess we are lucky that way. 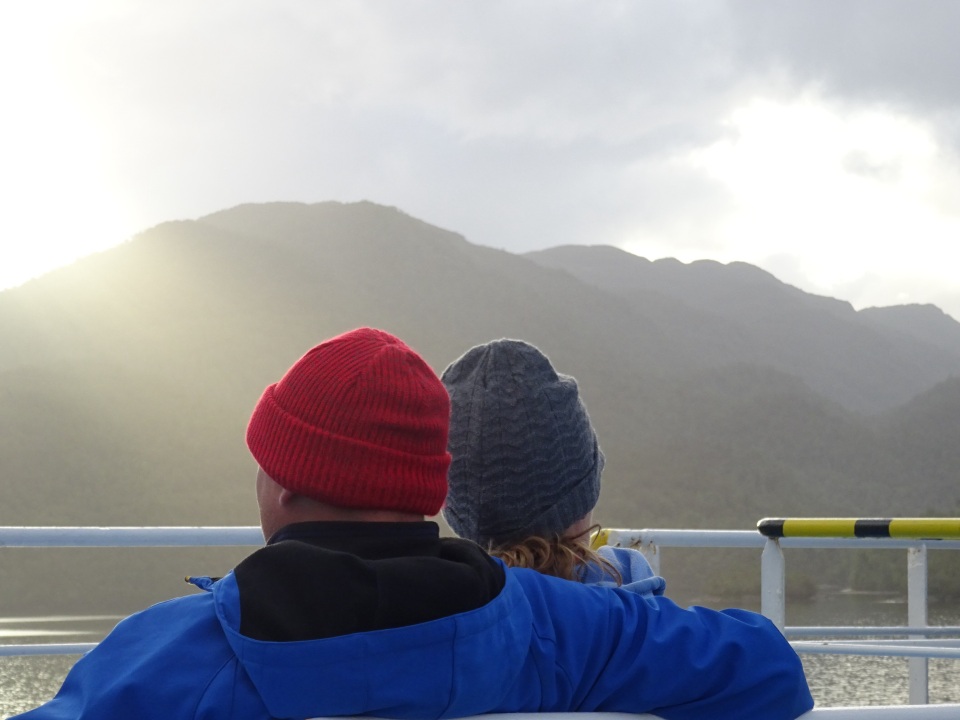 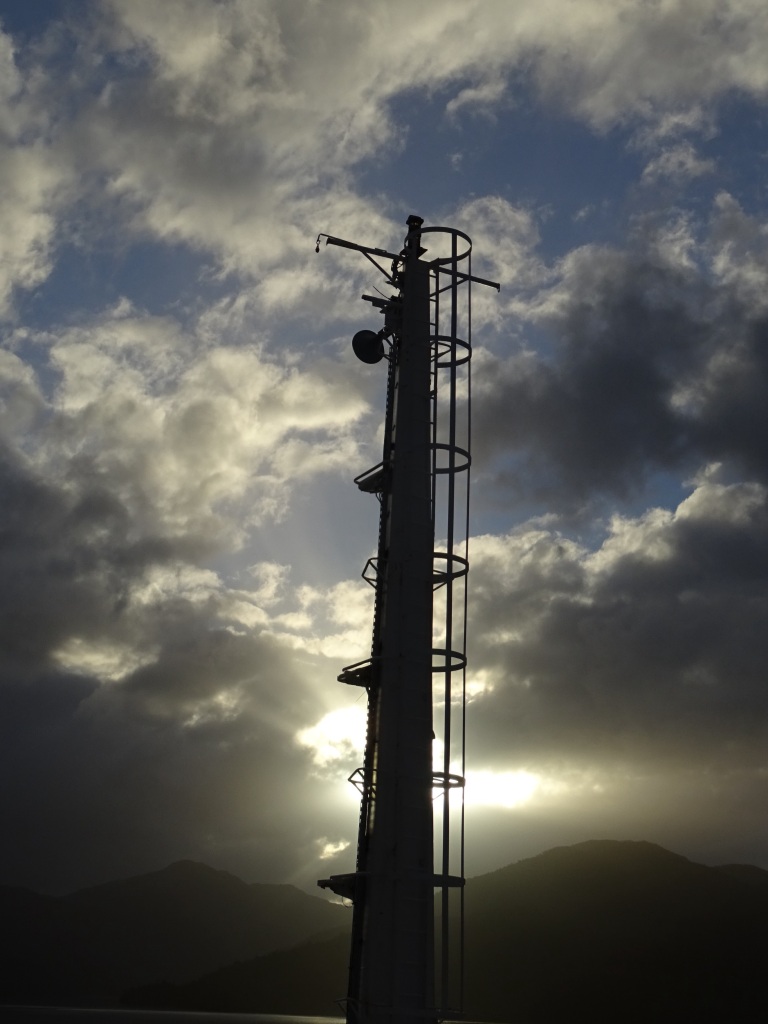 The mast, the night before the storm

Going to Sea… So the captain had prepped us for seas between 5 and 10 Meters – thinking to myself I hope it’s 5 Meters… He anchored the boat in a channel the night before and then marched us out into the ocean about 9 a.m. that morning.  The motion of the boat wasn’t crazy bad, but then it started to get worse with rolling seas pitching the boat forward and sideways at the same time.  We stayed on the forward deck and outside as long as we could, until it got very cold and windy.  I gave everyone motion sickness pills about an hour before we hit the seas so everyone was a bit drowsy.  We all did fine, Gavin let the birds experience what we had for breakfast, I thought Cindy was going to share as well, but in the end she didn’t share.  As luck would have it our cabin door of our original cabin broke, so they moved us up to a very nice cabin with a window that looks forward – I’m not sure how long, but Cindy was just sitting there on the lower bunk staring foward at the sea – not wanting to talk with someone.  We all fell asleep around 3 pm and woke up later feeling perfectly fine.  It took until about 10 pm to get out of the seaway.  During all of this I went back at lunch to find Hayden sitting there eating a big plate of mashed potatoes – saying “Dad I’m fine” – which I believed from the clear evidence sitting in front of him.  He spent the day watching a movie in a closed room aboard ship – and did fine.  So out of all of us he “rocked it”.

Passing another ship in the channel – very cloudy and rainy.

Look boys – we’re leaving land and heading to sea… sea anything yet? nope…

Our seasick base on deck – boys lying down with blankets, Cindy being a pillow.

Gavin after “sharing” his breakfast. 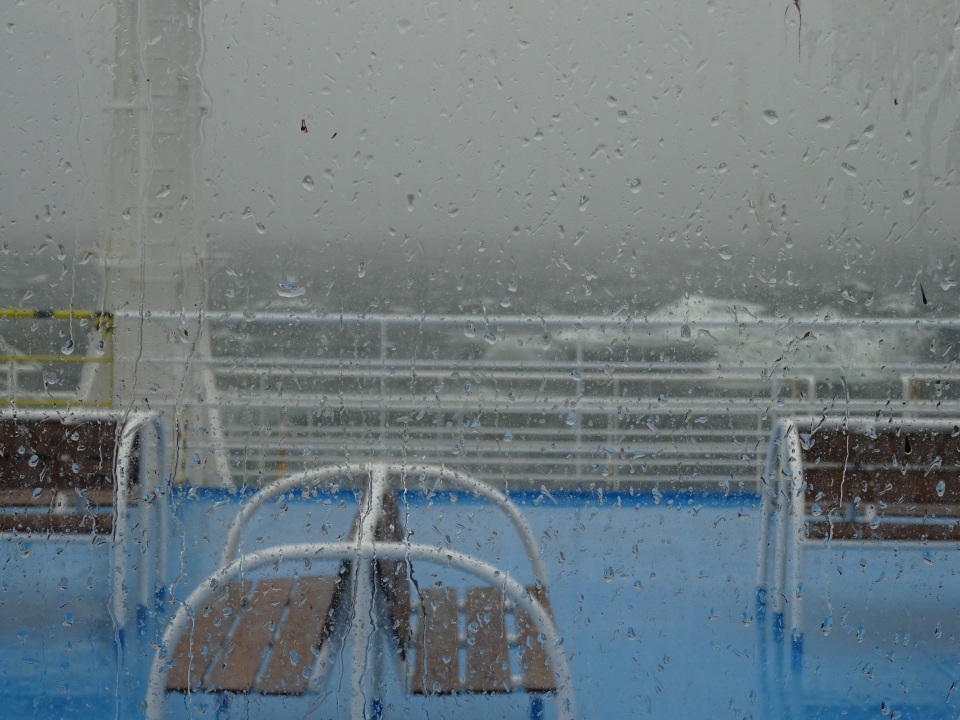 We are rocking and rolling now. Deck closed and we are inside looking forward out our window.

Cindy being happy after waking up and the ship is not bouncing around as much.

Gavin in the window – this is our forward looking room where we got to see all the action. 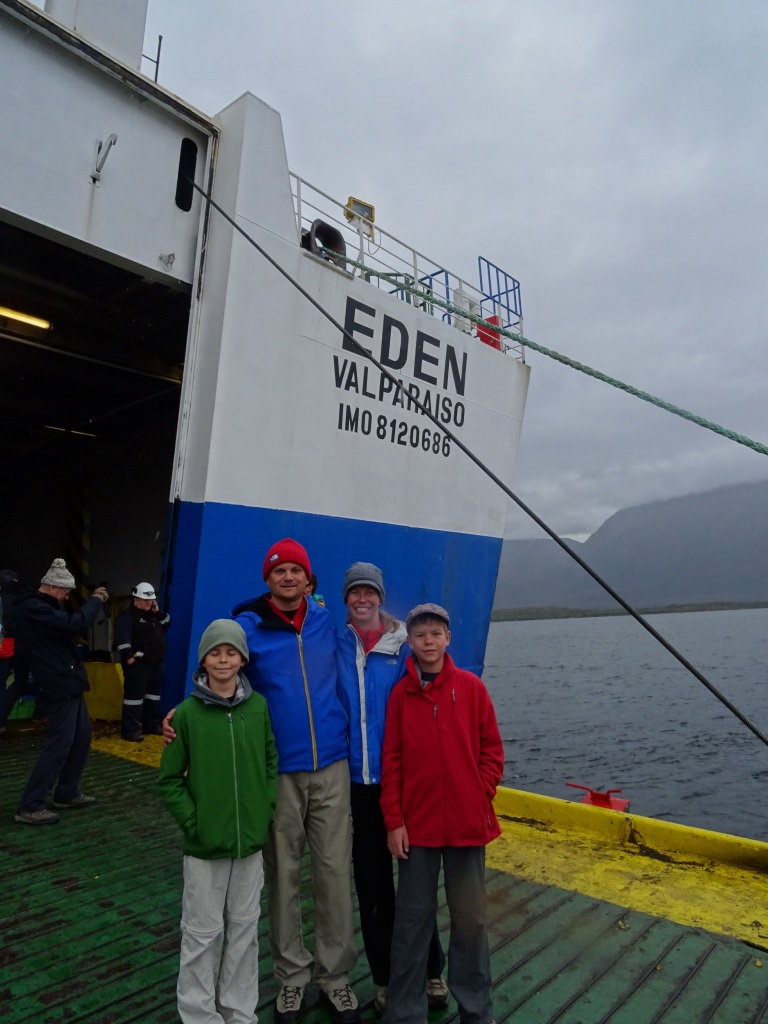 At a boat stop – taking supplies and locals off the ship 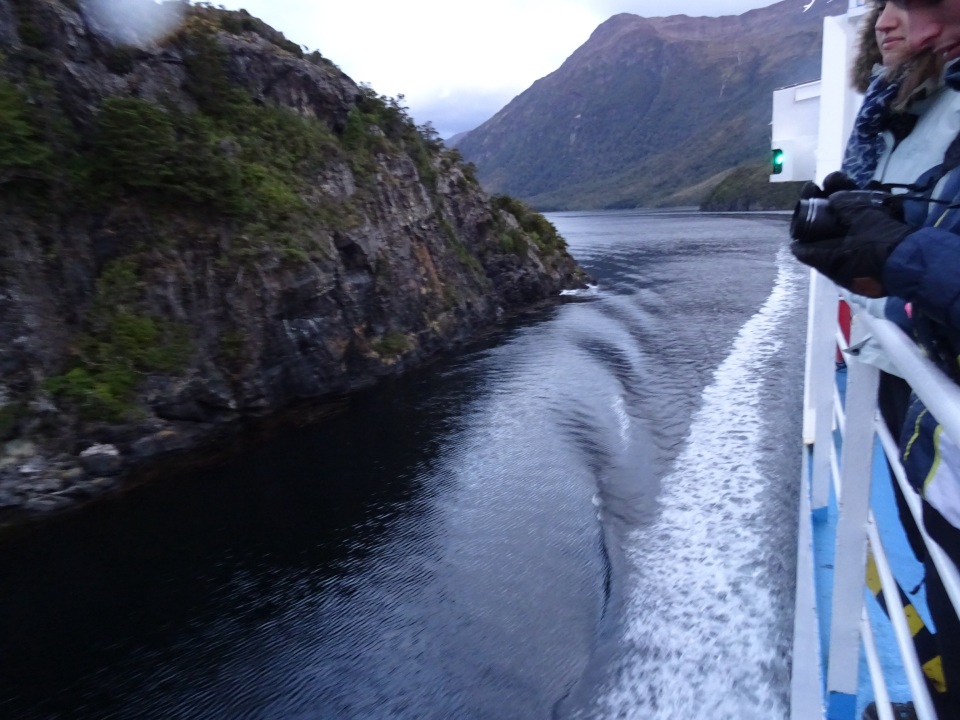 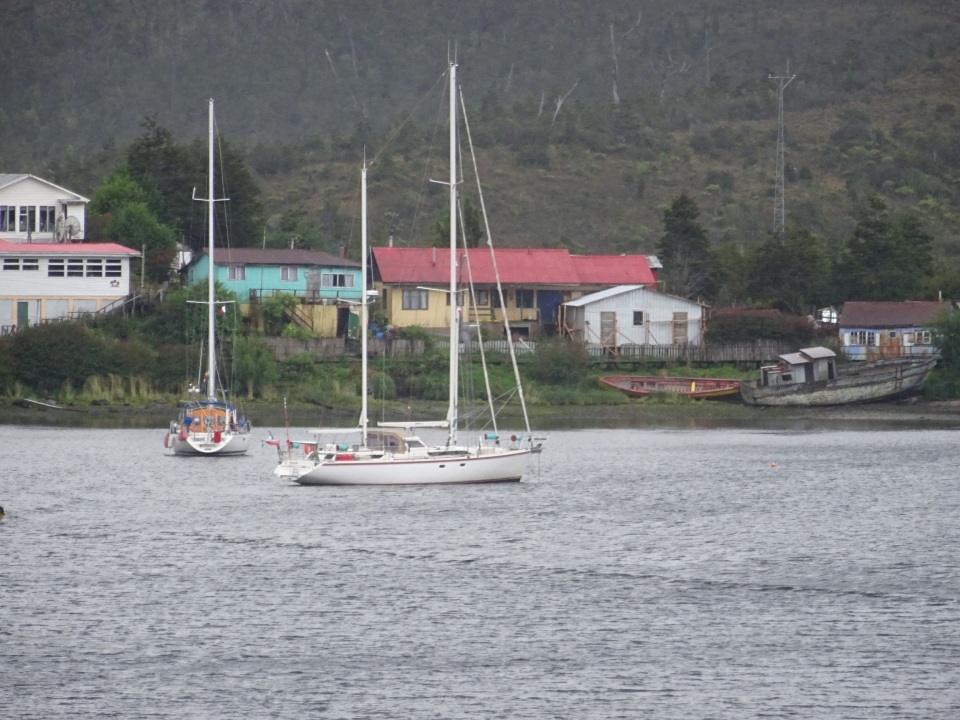 Yup – sail around the world – some nice boats at anchor – after the sea we went through I wouldn’t want to be on one of these.

This ship is wrecked, on top of another ship that they didn’t know was there until this one found it.

We were able to go to the ship bridge which was fun for the boys.  They were able to talk to the crew, see how the ship worked and be very inquisitive about how things are aboard the ship.  All in all a good time.

Arrival Puerto Natales – 6 days later, three more than planned we arrived in Puerto Natales.  It’s a good thing because our clothes were running very low and we were all ready to get off the boat.  Since we’ve been so active doing things sitting around and just eating got pretty boring pretty quick.  Puerto Natales is amazing and beautiful.  You are in the city closest to Torres Del Paine national park.  The town is filled with trekking stores, camping gear, and major tourism activities.  It took about 5 hours to get our car off the boat, but then we were able to get some gas, some lunch and drive to the park – 1 hour.  We are staying in the Hotel Rio Serrano – which is very nice, probably too nice for what we really need, but it’s hard to find a hotel room.  We promptly washed all of our dirty things in the sink and tub making a complete mess of the bathroom – i’m sure not the first time, but at such a nice hotel i’m sure it’s frowned upon. 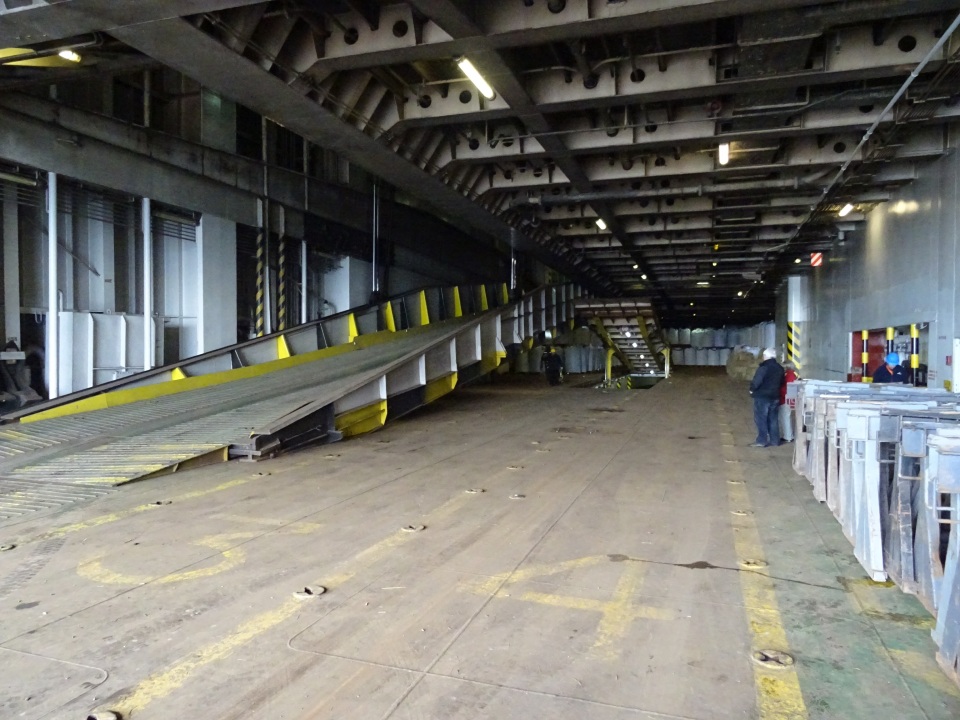 the morning before arrival 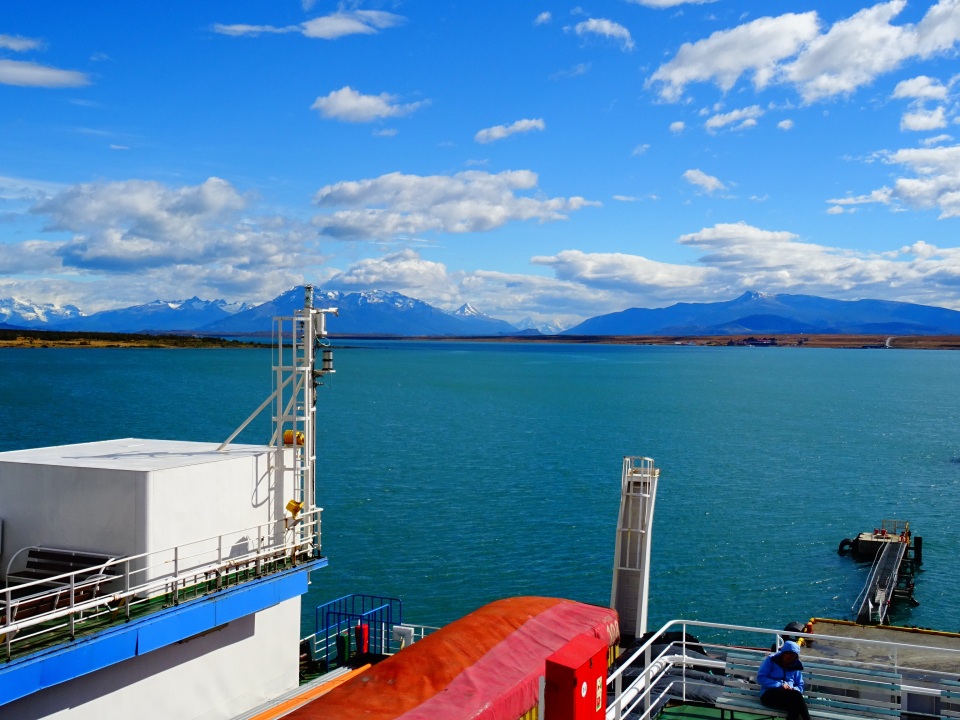 guys taking the ship lines to the shore.

We are now in the national park – our second day.  Yesterday we did an amazig hike and it will be another blog post.  We drove back at midnight through the park in a rain/sleet storm and very glad I had put the extra bright lights on top of the car – as your are driving gravel roads with potholes, no real boundary markers and the potential for animals as well.   We made it no problems but we all are taking a break this a.m.

If you have a bucket list and enjoy the outdoors, Torres del Paine is worth the effort to get here.

Puerto Natales – you can see what’s next in the background.