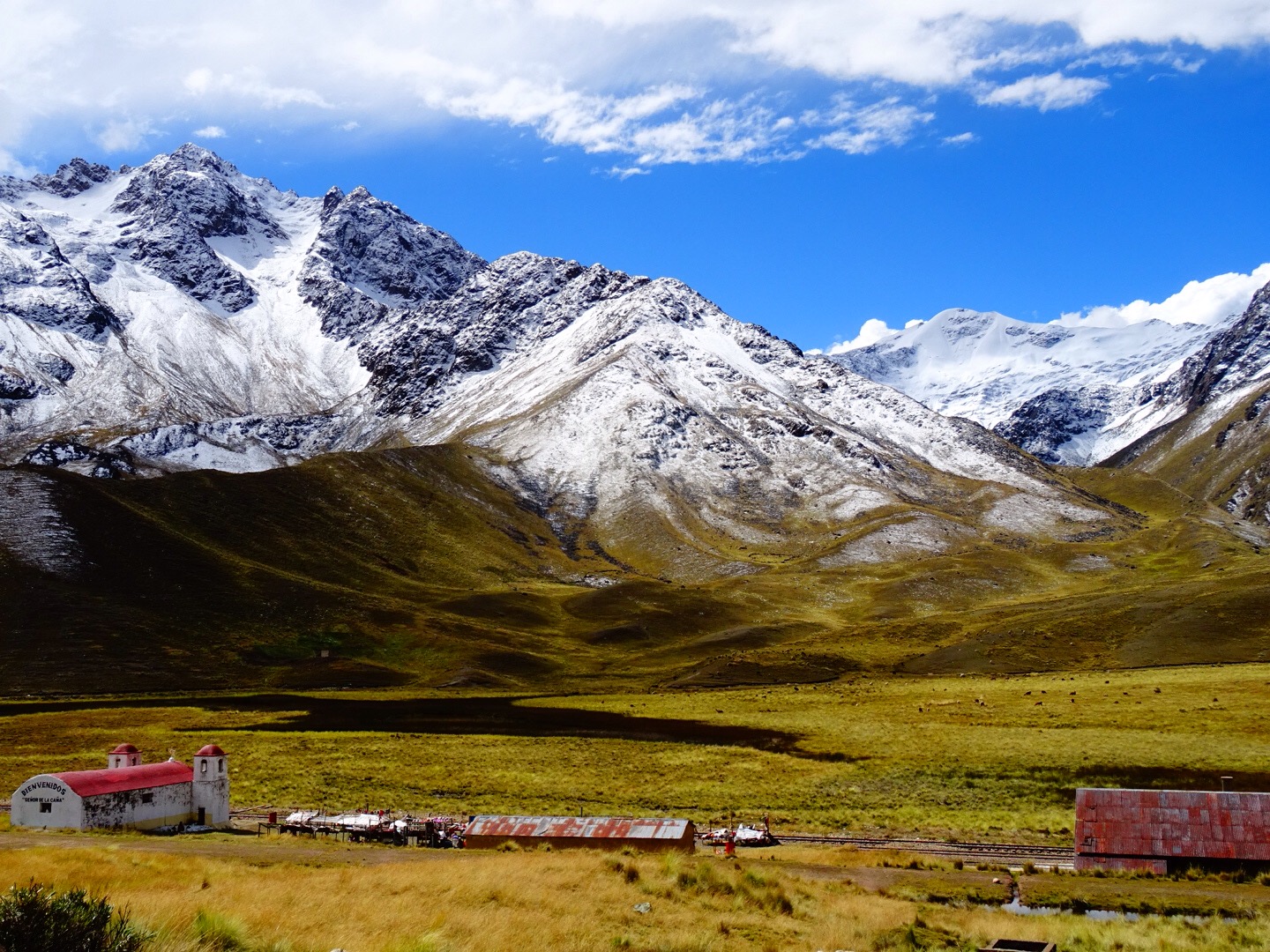 At the summit, crossing from Puno to Cusco. Amazing Views.

So we spent the last couple of days in Puno near the Peru/Bolivia Border and Lake Titicaca – one of the largest lakes in the world – at 13,000 feet.  Yesterday we took a boat expedition to a floating people that live on islands that they make of reeds, as well as an island where we had lunch and bought some local wares.  Today we drove from Puno to Cusco (7 hours) and we are now in the Inca Capital.

So we spent all day yesterday on a boat with about 20 other people doing the excursion.  The lake people are pretty amazing, they have the very basics and live off of the lake for almost everything they need.  The lake islands are anchored in place using long wooden poles, but they can move their island home if needed.  Typically about 5-10 families will live on an island.  The people speak their own language (as well as spanish) and it is very similar to Japanese – or so we were told.  The reeds they use are all around and they have to keep adding to their island every two weeks.  Every year they need to rebuild their house as well.  To say it is fundamental living is a stretch – their stove was about 2×1 ft and sat on a concrete slab.  The island was a bit mushy when you walked around on it – definately different.

typical dress, notice the kiddo on the back.

The reeds that they use, and the bottom – very shallow.

A house on the island

A youngling on the island.

After the floating islands we took a 2 hour boat ride to another island (real) to have lunch and learn more.  Our island, Tequile, is inhabited by locals who have their own culture as well.  Counter to most other places, the men do all of the weaving and women work in the stores selling wares.  The men wear very colorful hats and belts and the hats have different meanings – married, not married, importance in community, etc.  One of the rules is no pictures of people – so we don’t really have any.  I did take one that is about the best we will get.  We had to do about a 2.5km walk up hill – which at 13,800 feet was a bit hard after being at sea level for several months.  I was definately feeling the altitude, as well as Gavin.  A little coca-tea seemed to help.  Anyway, after lunch, and walking back down to the boat we started the 2.5 hour ride back to Puno.   About 30% through I was sitting in the back and smoke started coming out of the engine bay.  Having had multiple life experiences with smoke coming out of an engine room on a boat I went up and told the boat driver “captain”.  They slowed the boat and we spent the next 15 minutes getting flooded with exhaust from the engine.  The captain opened the engine compartment/box and it was an exhaust leak.  We had to putt back at 5 knots and they probably had exhaust problem with their engine.  Note that these are not boat engines, it’s a car engine that has been retrofitted into a boat.  The guy had a toyota steering wheel. 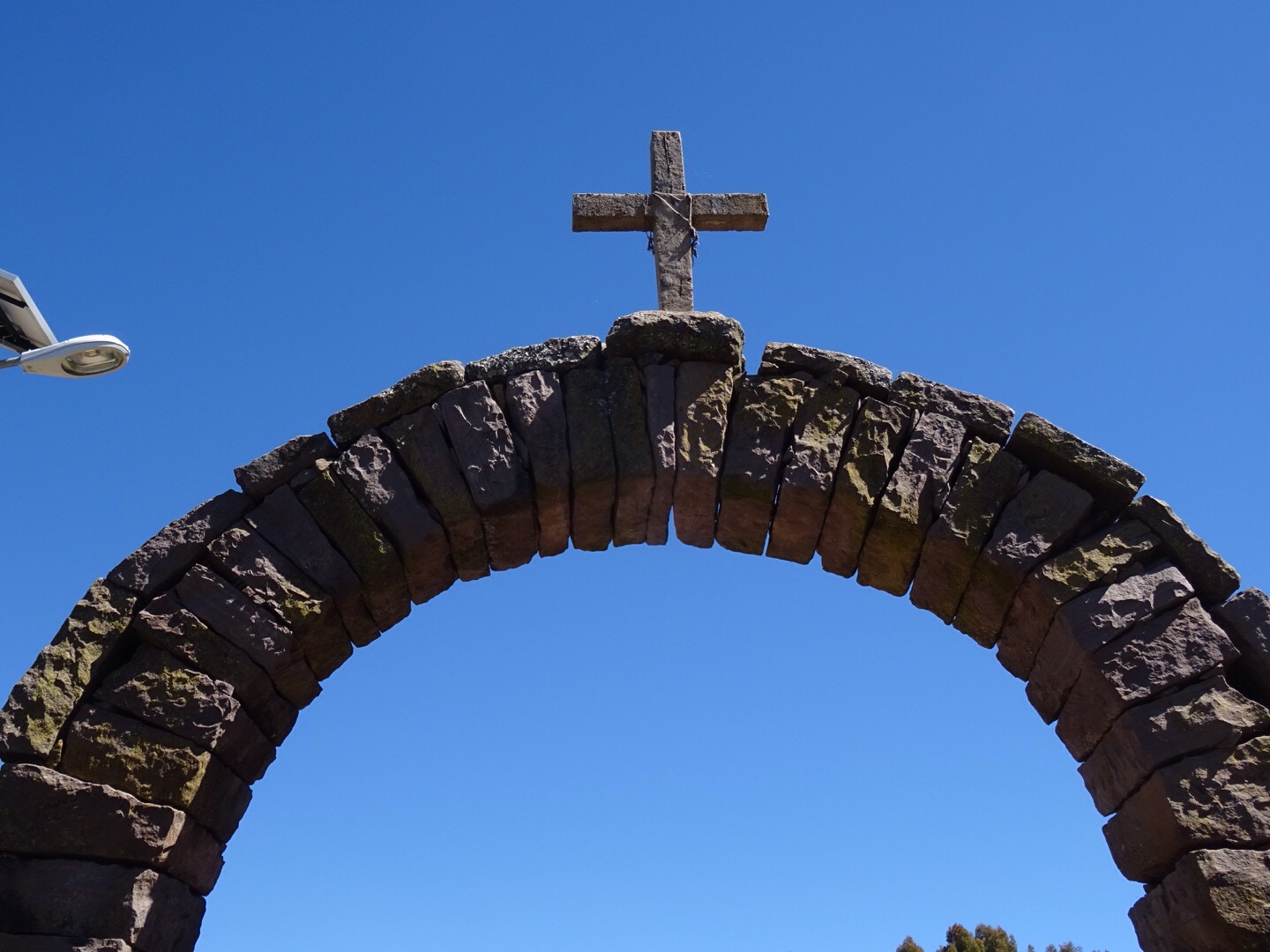 Archways waling up the hill. notice the minimal mortar. 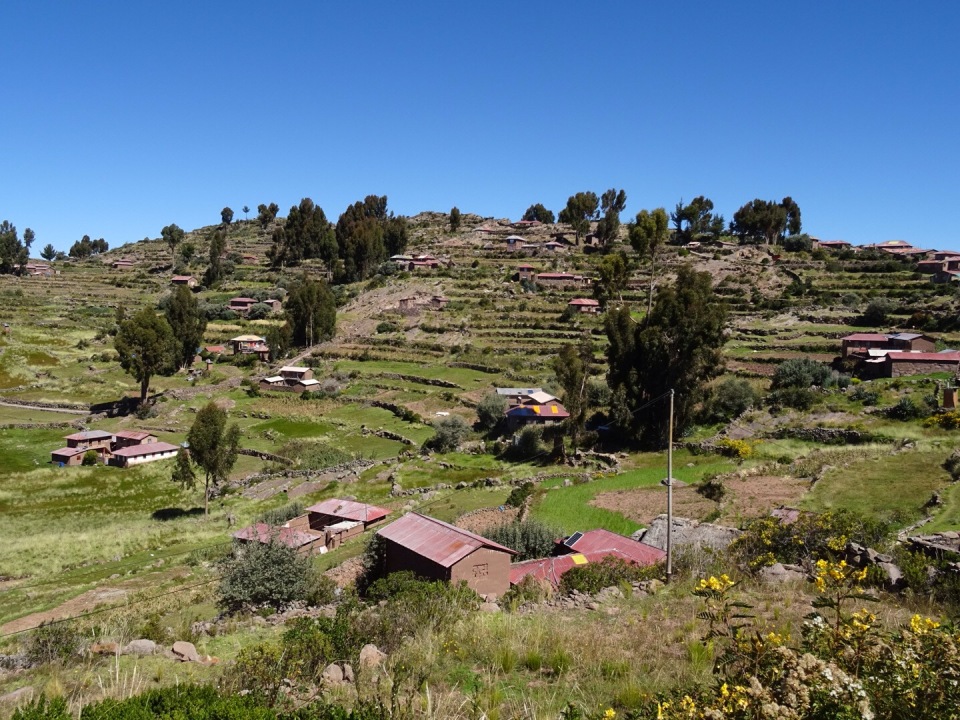 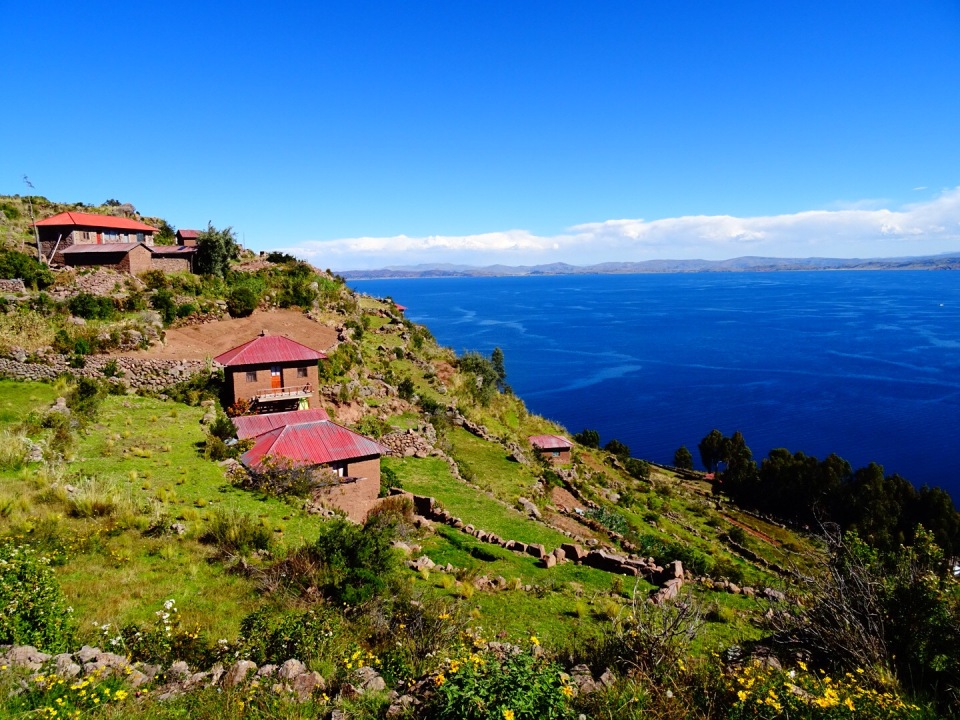 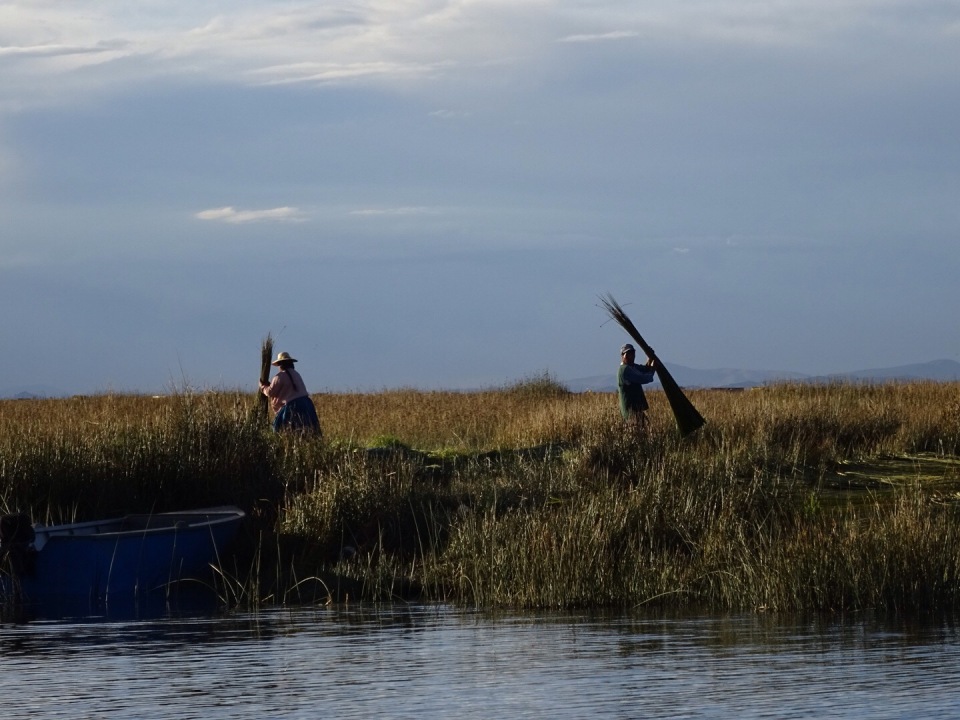 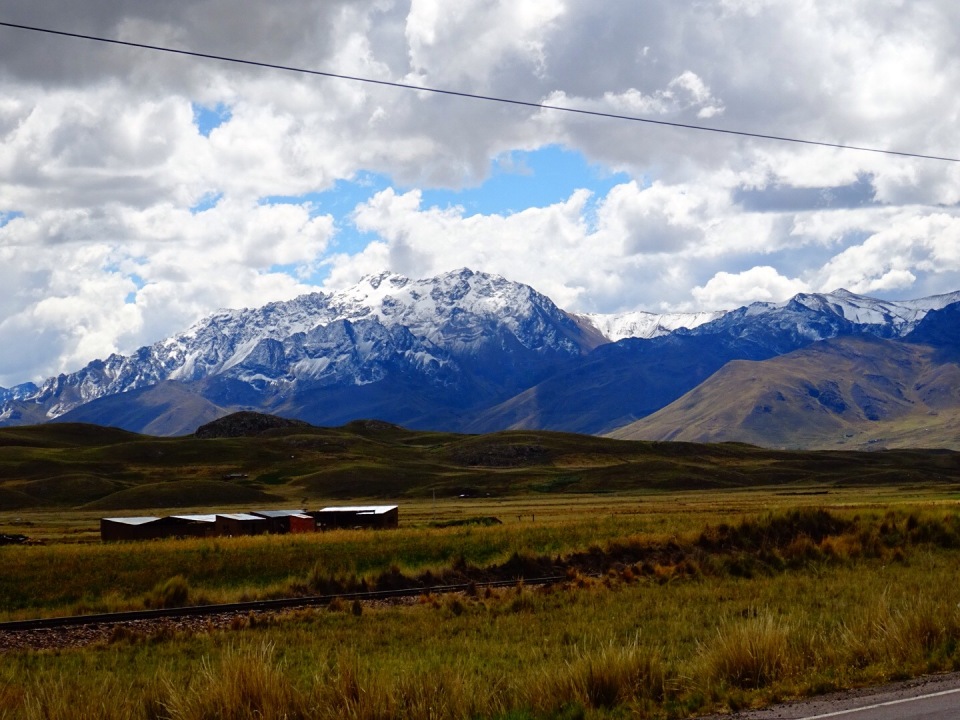 We spent today driving from Puno to Cusco.  Yesterday there were more protests in Arequipa as well as Puno regarding the mine.  We elected to leave a bit earlier so that we could get out of town.  Leaving Puno was no problem and we saw people starting to meet, but traffic was moving so we were fine.  When we came into Cusco it looked like it got more vocal today with a truck burning in the street, tires burning and lots of people on the side of the road.  i’m not worried about our safety at all.  We go through the protesters and don’t stop, with windows up.  We only go if others are going as well.  One thing I’ve noticed is a lack of police at these protests, maybe they don’t want conflict, but not sure about their motivtions.  It makes tourists nervous and tourism is a very large part of the economy. 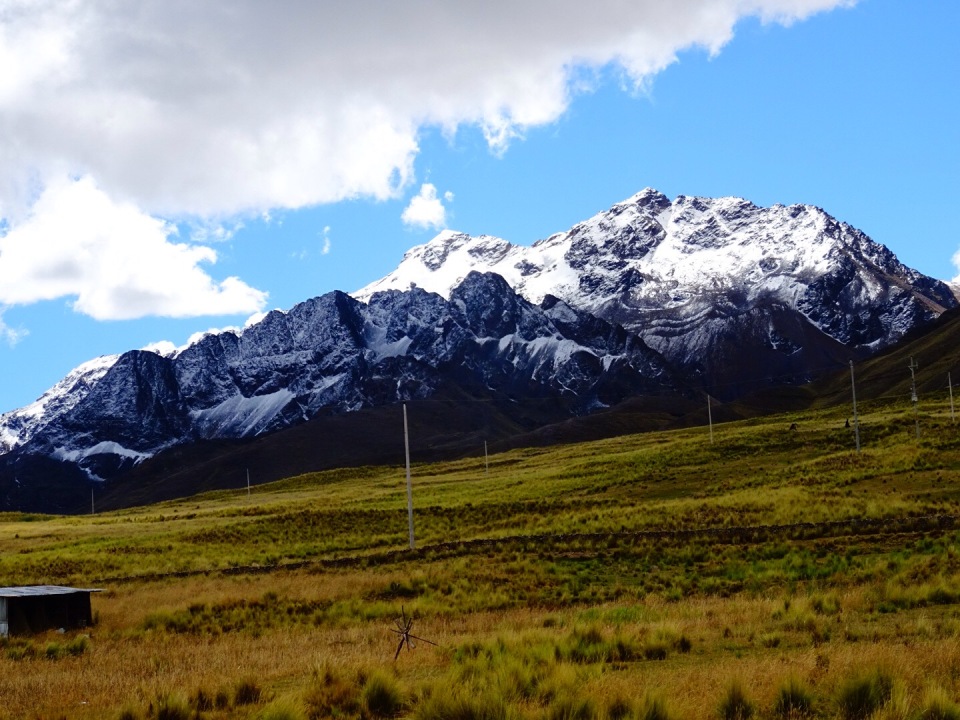 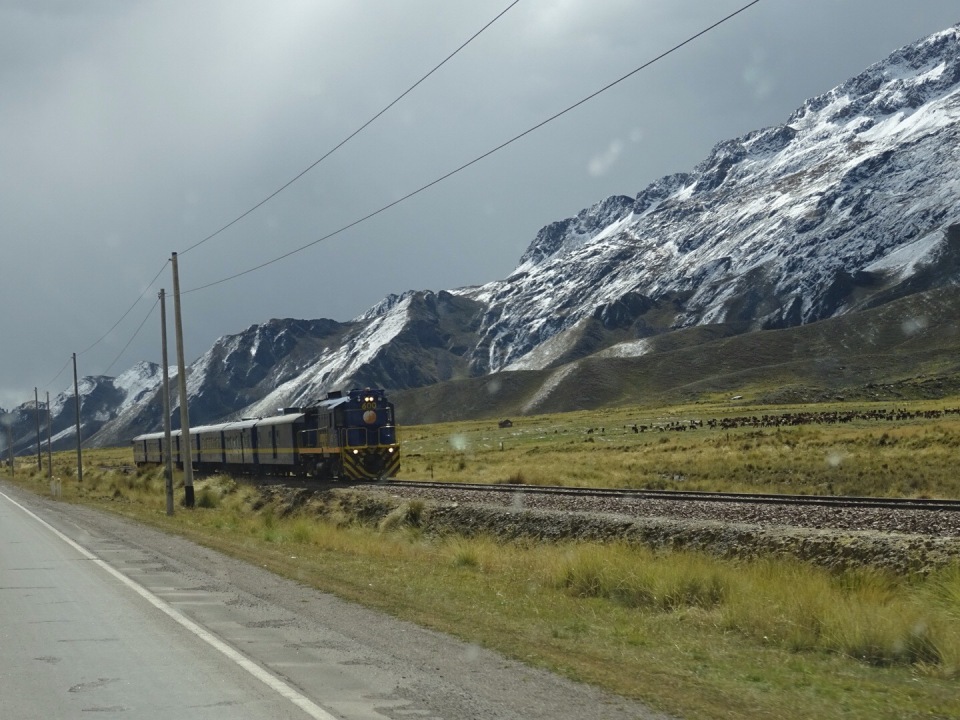 The drive was great – easy for the most part.  Going through cities / large towns can be a bit unnerving though.  The traffic here is a first come first serve and everyone is in first type of driving situation.  The roads have huge pot holes, speed bumps, trash, and of course the random dog crossing the street.  Other drivers can be a bit crazy, swerving into your lane, crossing across in front of you, and you just keep going hoping you won’t hit someone.  Cindy got a bit nervous tonight coming into Cusco as you have busses pulling out in front of you/next to you – almost without looking.  WE made it in without issue and the car is parked right in front of the hotel.  Tomorrow we are taking a cooking class – we even have to goto the market and buy the goods.

We just confirmed taking the train to Machu Picchu on Sunday for Gavin’s birthday, so taht should be a pretty cool thig to see on your 11th birthday.

That’s it.  We are confirming shipping schedules back for the car, etc.  Yes we are down to about 7 weeks left on our journey.