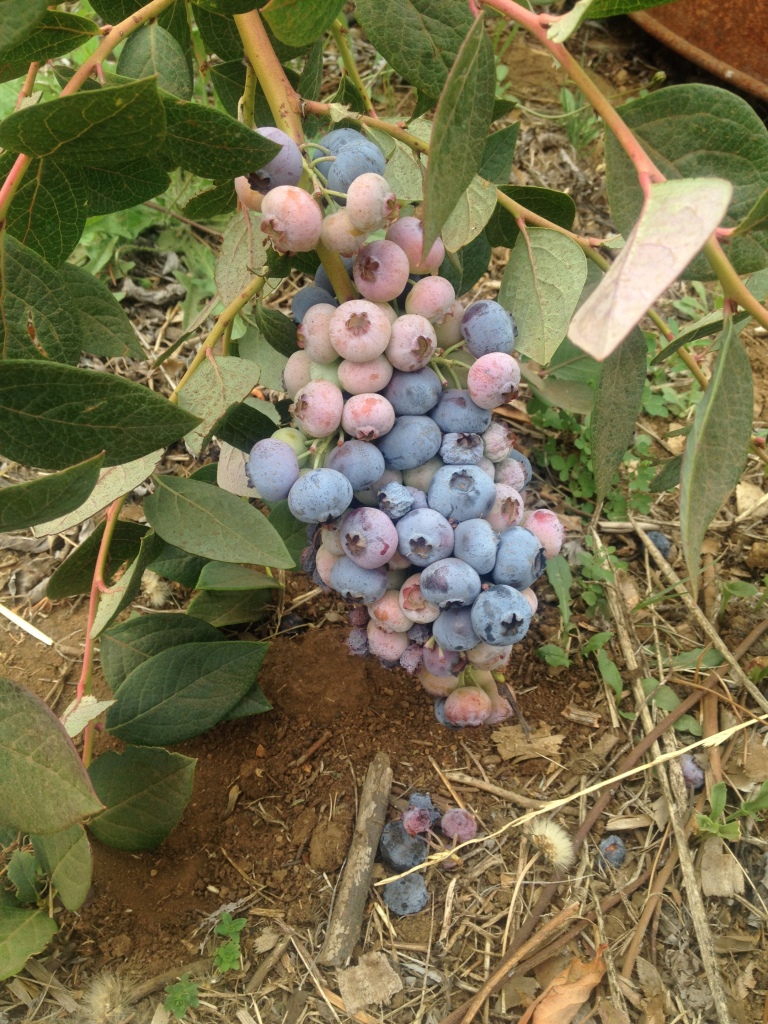 Blue Berries waiting to be picked.

So it’s been a busy couple of days.  We have gone sort of crazy the last couple of days doing lots of neat things.  The weather was a bit colder so we managed to not be at the beach – and recover from our crazy hike.  We managed to meet some people at the BBQ that are from America & Australia – and they own a blue berry farm.  Well that perked our interest – so we proceeded to make arrangements to go see the farm.  The owners of the farm had never grown a blue berry before in their life.  They literally came to Chile – ordered a bunch (50,000) plants – and then proceeded to find property for their farm.  A year and a half later they had found the spot.  They have about 10 hectares that are planted and get about 5-6 runs on the plants through the season (Jan-Mar).  It’s a lot of work.  Blue berries are hand picked – so they have to bus in workers to pick the berries.  I do have to say, they were the best we have ever had – large and very tasty.  Currently most berries in Chile are exported to other countries – and now you’re thinking “USA right?” – nope – most these days are trying to go to our friends in China – because they pay better – it’s as simple as that.  They don’t do organic farming because there are some pests that can really kill your crop – others here do organic farming – but now the rules are such that it doesn’t make much financial sense to do organic farming here.  Even when an organic shipment hits the states it gets put in a container and ‘gassed’ for pests.    The boys had fun at the farm.  They were also expanding their water pit a bit – see the pictures on that.

Standing before the days pick

Our gift from our host. 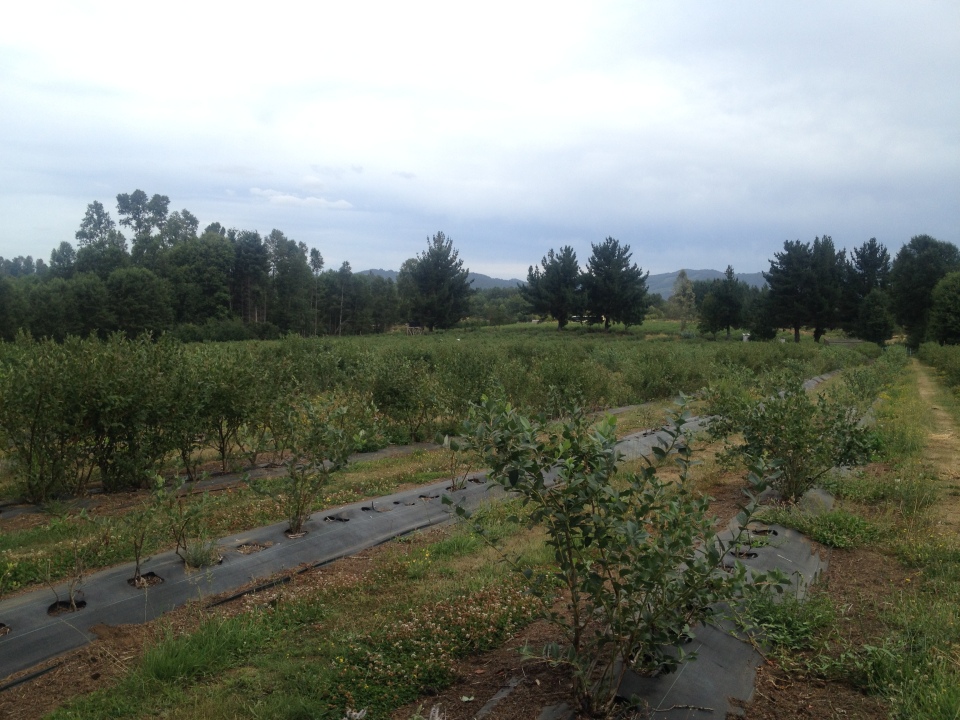 Part of the blue berry farm

Airshow – so upon leaving the farm, we managed to see a local airshow.  I was sort of surprised to see so many planes here – but aviation has its draws so you get the same group of men doing the “I’ve got a plane” thing.  Most were camping out next to their plane in their tent.  It was pretty clear that they are a bit more lax on flying here than we are in the USA.  Some planes were taxing so close to the runway it was sort of shocking.  They did have a good acrobatic team performing which was fun to see.  It’s so amazing how many people will simply watch a guy do circles, flips, etc. in his plane if he has smoke coming out of it.  Most of the planes were Cessna’s although Gavin found a King Air 250, as well as a couple of Bonanza’s, a Cirrus, etc.  The same planes we have in the USA.  Flying here would be excellent as it’s close to Santiago – mostly it’s VFR flying and you’re near sea level – much different than flying in Colorado where you are bumping around at 10,000 feet.

Ugh buddy, you might want to wait until this guy lands before taxing into position… 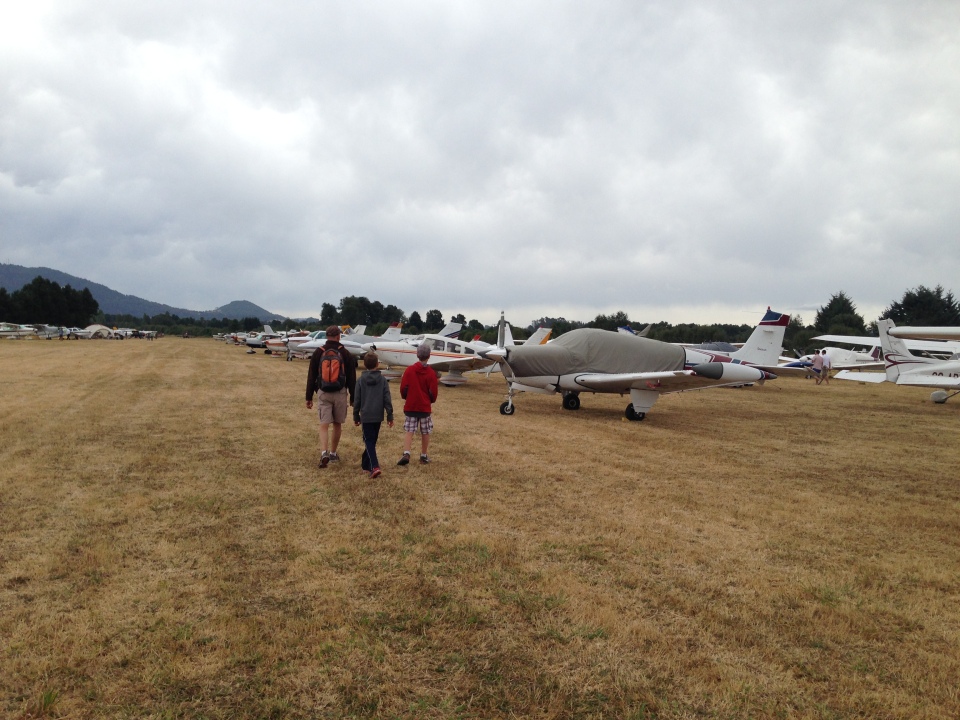 All kinds of planes 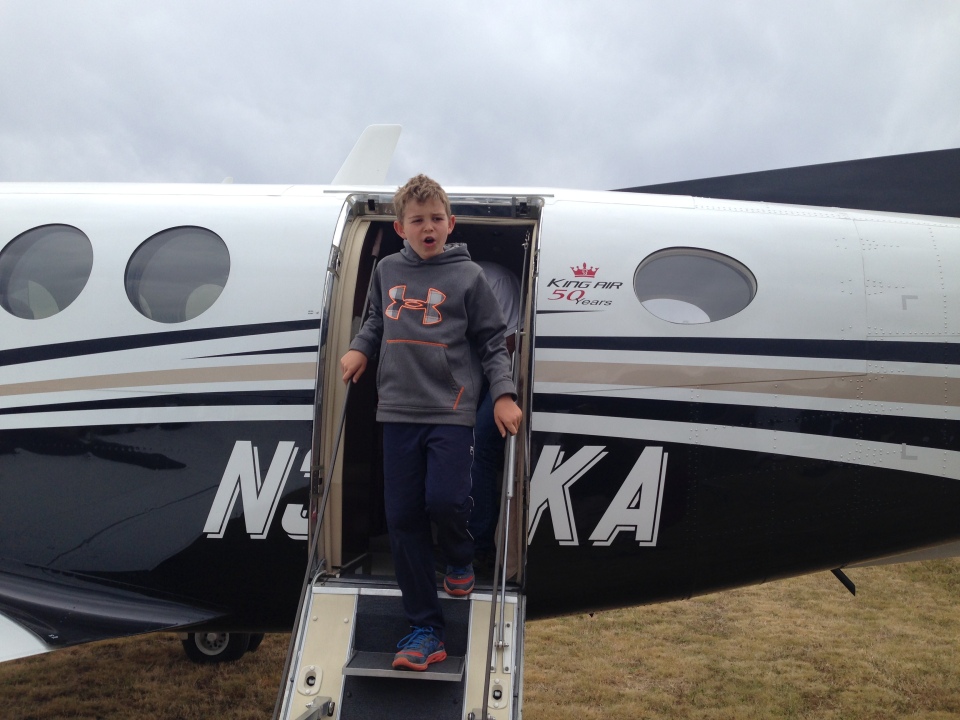 Hot Springs & BBQ – We made it to another hot spring the other day “Terma’s Huife”.  It was nice, however we had a couple of other people there as well.  That day it was cold at the beach, so we realized that everyone else had the same idea we did – go sit in a warm pool vs. the cold beach.  We hung out for a while, then it was getting late so we proceeded back to Pucon.  Over the last couple of weeks we have been passing this BBQ stand “Coyote” on our way home.  Every time we pass I take a glance over and think “we should go”.  So the boys were hungry and we were stuck in miserable traffic – so we decided that it was the night.  It is an all you can eat type of place.  Grab a board at the table, walk up to the BBQ guy and tell him what you want.   We had steak, lamb, sausage, chicken, and ribs.  The boys liked the steak a great deal – but some of the other things (lamb ribs) they didn’t really care for.  Our “meat-a-sauras’ diet was good – but the next day I was telling Cindy that I shouldn’t do that again.

Us and a few friends at the hot springs

Lamb anyone? One day cindy will own a sheep farm – we will name it “three legs” for all the three legged lambs out there in the world… 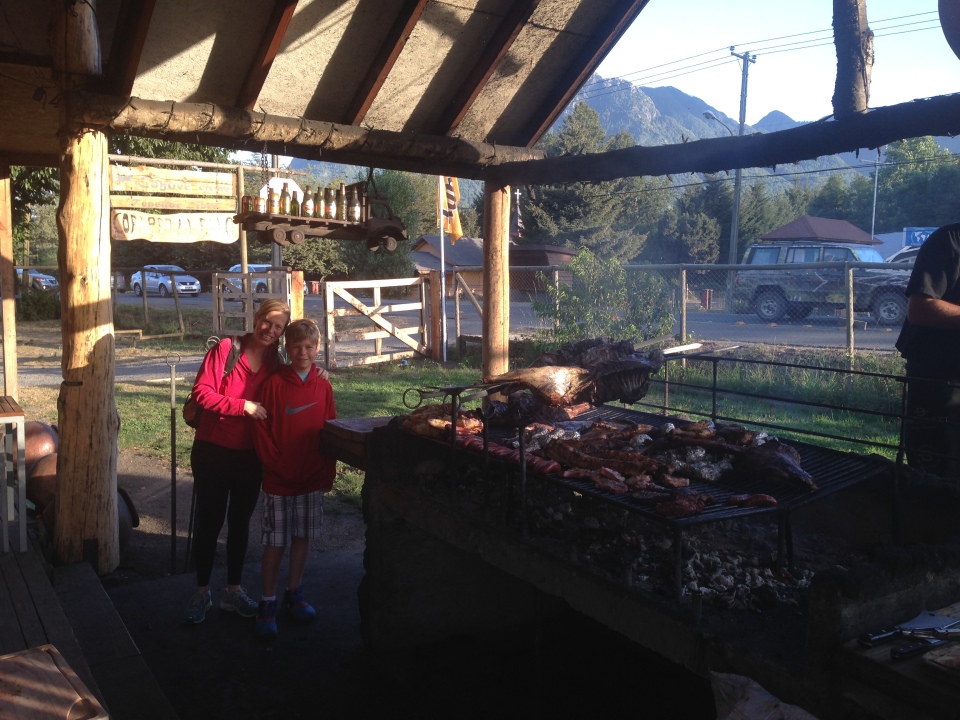 Cindy’s almost a vegetarian – so this moment might be a little hard to explain back in Boulder. 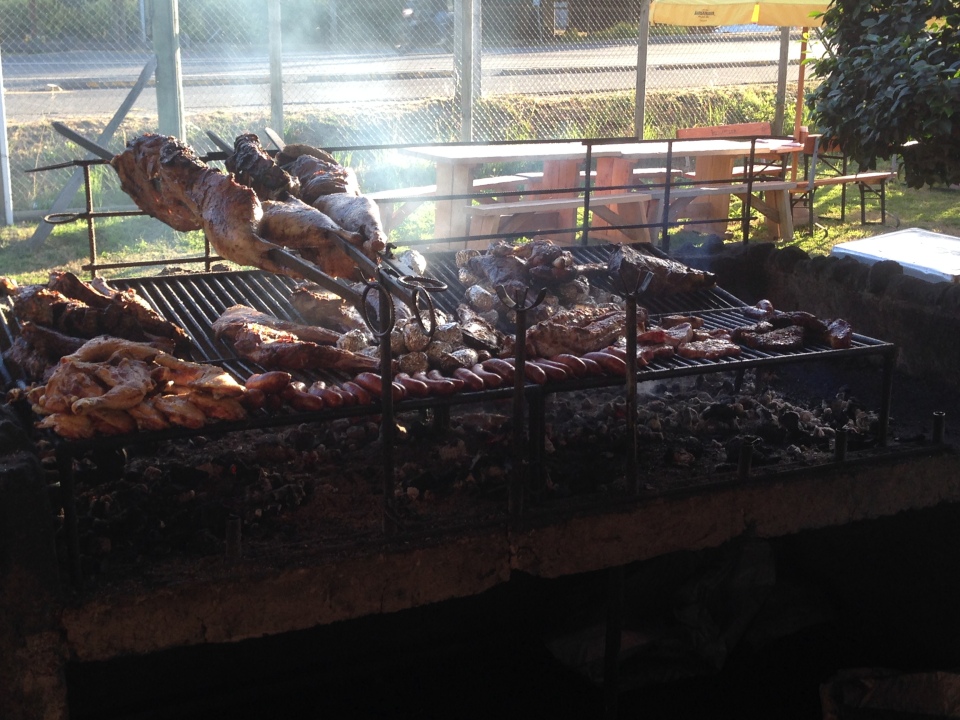 No words needed – a vegetarian nightmare!

Dessert – last night we went to a Sushi place.  It was pretty good – boys wanted sushi – so we stopped in and had some.  Lots of things are made with shrimp and avocado.  There were really only about 5 fish choices – they don’t seem to get the more popular things that we have in the states here.  Most of the items we ordered were based on Tuna and it wasn’t red like you see in the states – more a gray color.  It was ok – it was good and we moved on.  The service here has really dropped in my opinion – many times your food will come, but if you want a refill on a drink or something else you always have to ask.  No one seems to come back and ask if you need anything else.  This I don’t remember from before when we were here.  Anyway… last night we were sitting next to this other place that we had walked by that is a dessert oriented coffee shop type of place.  After waiting for our bill for nearly 25 minutes at the sushi place (Gavin and I were playing tic-tac-toe on the table with chop sticks (clue anyone?)) – we immediately walked into the dessert place.  So we’ve had some forays into desserts here – some didn’t go that well.  I think Cindy was here on a mission – she went in, looked around, came back – pulled out her i-phone and was typing in the words from the menu – all to get the best choice possible.  It really is too bad when you want dessert and you choose poorly – and you really like having dessert.  So Cindy ordered this great piece of pie/cake/torta – the boys each had ice cream and I shared everyone’s stuff.  I think it was a “win”. 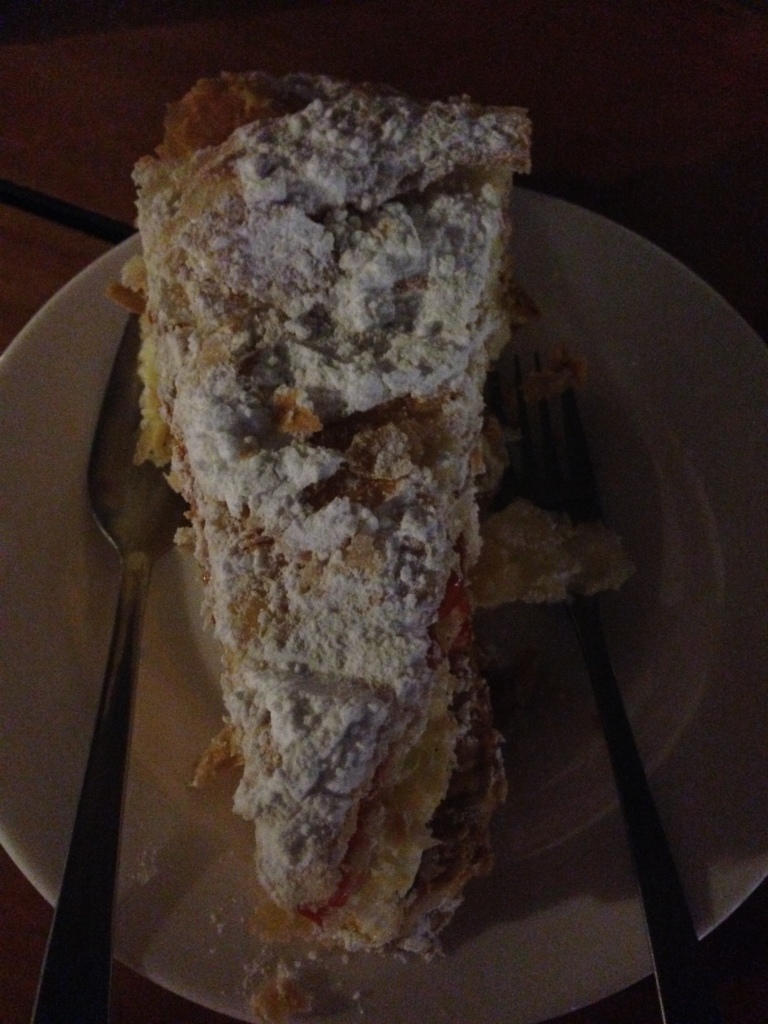 I scream, you scream, we all scream for …

Growth & Traffic – So one of the things about Pucon is that it is now the ‘activity hub’ of Chile – and one of the most popular tourist spots for tourists and Chilean citizens.   These two weeks have been crazy – lots of traffic, lots of people and generally the town seems overwhelmed with it all.  The streets were never designed for this many people.  We went to Villarica on Saturday (close by) and we got stuck in traffic for about two hours.  All around you see “Se vende” – lot/property for sale – and now you are seeing condo style complexes being constructed and built.  I hope that the Chilean people realize that Pucon is very nice as it is and that you can easily take it from very nice, to making it Lake Tahoe very quickly and probably easier than they realize.  They do have things like no plastic bags here – so bring your own to shop.  We enjoy getting out of Pucon more than being downtown – although it is doable.  My guess is that people who came here 5 or 10 years ago because it was so quiet and bought land to semi-retire would not buy here now – and would find the “next pucon” that doesn’t have as many people and pending development.  I guess it’s a balancing act – growth vs limits – always everyone’s dilemma. 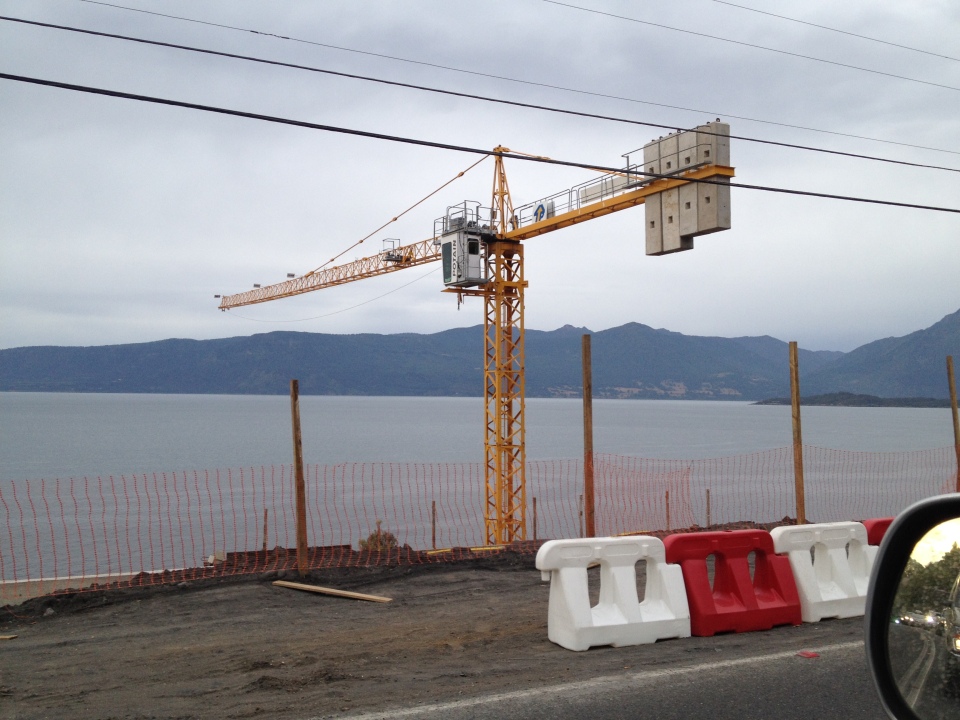 Condo on the water anyone? 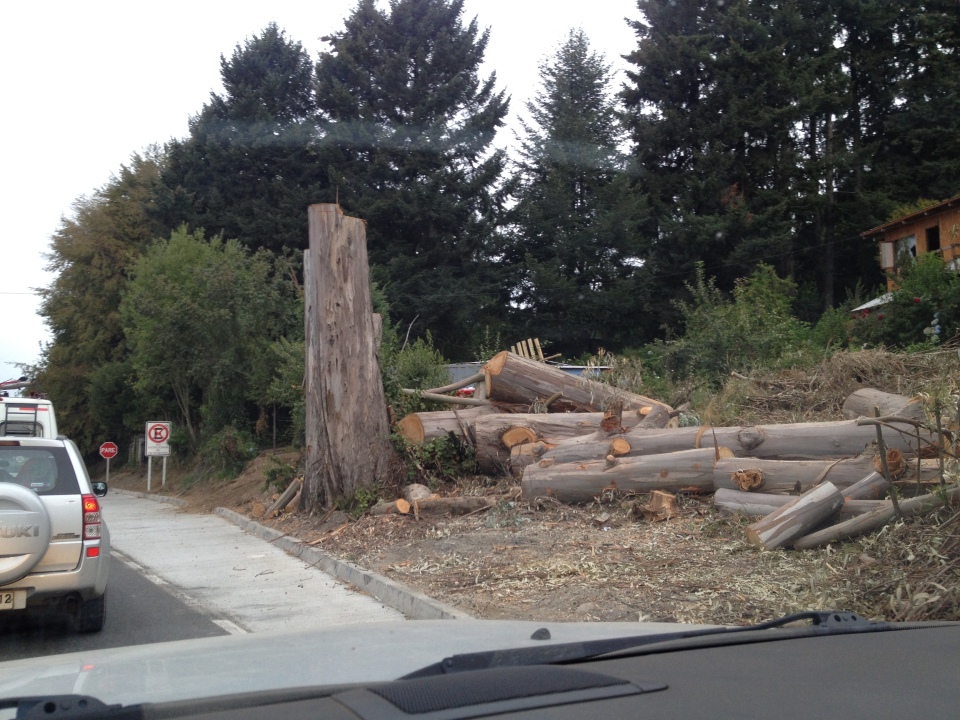 This tree was in the way of progress. 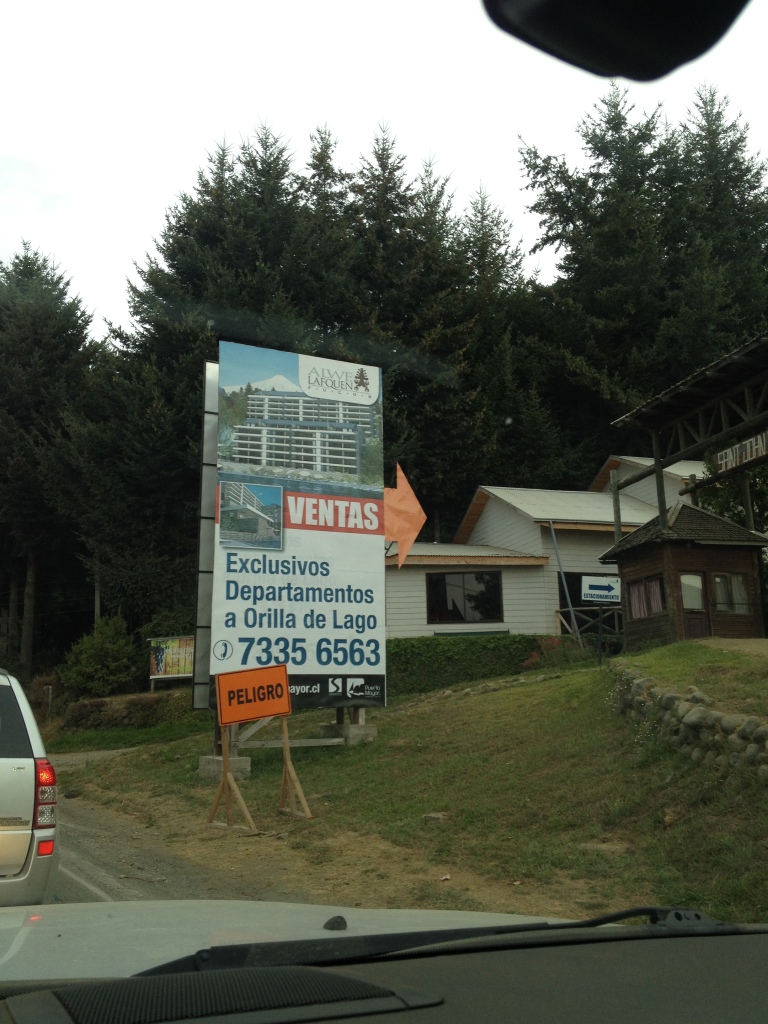 This condo complex is what’s coming. Most people come here for the scenery, activities and the outdoors – hopefully condo land doesn’t appear.

A little taste of the traffic the other day – we were dead stopped and it went on for ever like this.

Build it and they will come? uh they are already here!